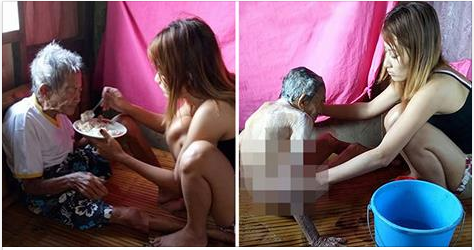 By Tracy You For Mailonline
Published: 06:54 EST, 29 June 2016 | Updated: 08:09 EST, 29 June 2016
Family means no one gets left behind, ignored or forgotten - even if when they're old, grey and can no longer look after themselves.
A woman from the Philippines has perfectly demonstrated the beautiful philosophy after she offered to feed and bathe her 98-year-old grandmother who is too weak to stand or walk.
The loving granddaughter posted a set of pictures capturing the heart-warming moments on her Facebook account, which has melted the hearts of thousands, reported Huanqiu.com, an affiliation to People's Daily Online. Unconditional love: A woman from the Philippines has moved the internet after posting pictures showing how she nursed her 98-year-old grandma during a visit
The woman is called Jen Ampler and lives in Manila, the capital city of the Philippines, according to her Facebook page.
The pictures were thought to be taken when she went to visit her grandmother.
As of writing, they have received over 35,000 shares and 170,000 reactions since June 24.
In the emotional post, Ms Ampler wrote: 'Ever since I was born, you are the one who took care of me and raised me, grandma.
'When I was feeding and giving you a bath, I couldn't help but cry, because I remember when I was just a child, you were the one doing it to us.'
It continued: 'Now that you are 98 years old, please let us repay what you've done for us.
'We love you so much and please be strong. We will not abandon you even if you are that old.'
Ms Ampler explained in the post that before she started nursing her grandmother, she had tried to help her stand up and walk.
However, her elderly grandmother told her she could no longer do so.
Thus she wrote: 'Allow us to be your hands and feet because that's not enough for all the sacrifices you've done for us.
'I love you and I am crying so hard grandma.' 'I love you and I am crying so hard grandma': The woman said it was hard for her to see her grandmother struggling to stand or walk, so she decided to look after her Blood is thicker than water: She offered to feed and bathe her grandmother like what she had done to her when she was little
In a follow-up post, also uploaded on June 24, a teary Ms Ampler was seen crying and kissing her grandmother's weathered face. Her grandmother appeared to be moved by her touching gesture.
Ms Ampler's pictures have sparked an outpouring of admiration from users of Facebook as well as other social media sites.
Facebook user 'Sheila Santos' said: 'I cried when I read this. God bless you.'
Another user 'Analyn Arellano' commented: 'Hopefully all of the parents, grandmothers and grandfathers would have someone like you. Keep it up.'
A third user 'Elms Avanceña Lerios' wrote: 'It's rare in today's world for children to have such devotion towards their parents, especially in this condition.'
In many Asian countries, the local culture values family devotion highly and believes that young people should repay the sacrifices their parents and grandparents have done for them.
Ms Ampler's pictures have also moved many web users in China after the news was picked up by the media.
A user of QQ.com, named 'an an', wrote: 'Cherish the elderly people! I cherish my elderly relatives very much, because I have experienced the pain of loss. Once they pass away, they pass away forever.'
While 'mao luo ye sen lin' said: 'Hope this is real emotion. I wish her grandmother live past 100 years old. I miss my mother and my grandmother too.'
However, some web users in China suggested that the pictures had been staged such as 'Chen chen' who questioned 'why was she looking at the camera all the time'.
source   .wydailynews.com
Posted by Unknown at 8:19 AM