Home » »Unlabelled » 8 Signs That Indicate You Have A Gluten Intolerance

8 Signs That Indicate You Have A Gluten Intolerance 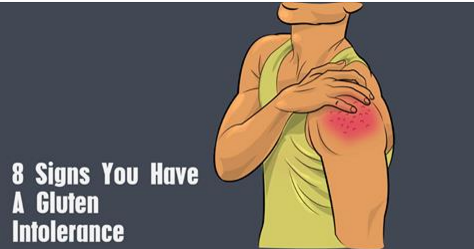 
Gluten intolerance is an increasingly common issue these days. While there are almost definitely some people who are only intolerant of gluten because of the media hype around it, there are also a lot of folks who have a genuine sensitivity to it.
Gluten, in case you didn't know, is a protein found in barley, wheat, and rye. In bread, it's the substance that gives bread dough its elasticity. This is important for bakers because it allows bread to rise and be light and fluffy. Due to its presence in grains that are used to make bread, pasta, cereal, beer, and livestock feed, it can be kinda tricky avoiding gluten.
Common signs of gluten intolerance include depression, pain, and fatigue. In more severe cases, it can also take on the form of celiac disease, an autoimmune disorder triggered by gluten. When a sufferer ingests a gluten product, the body reacts with an abnormal immune response and attacks the intestines. it is estimated that celiac affects 1 out of every 100 people. Below are eight of the most common symptoms of gluten intolerance.

As previously mentioned, gluten can cause a negative immune response that can cause damage to the intestines and hinder your body's ability to properly absorb nutrients.

Gluten causes inflammation, which can lead to fatigue as the body tried to re-allocate its energy supplies to manage said inflammation.

According to a recent study, nearly 56% of people with gluten intolerance reported experiencing migraines. Comparatively, only 14% of the control group suffered from the same issue. This suggests that gluten likely plays a major role in causing migraines.

As mentioned previously, ingestion of gluten leads to inflammation of the body, which in turn causes joint and muscle pain. This claim is backed by WebMD and the Arthritis Foundation.

Many people who suffer from gluten intolerance also report a distinct lack of mental clarity and focus - "brain fog." According to an article published in the Journal of Neurology, Neurosurgery, and Psychiatry, a type of antibody known as immunoglobulins have shown adverse, abnormal reactions to gluten, leading to impaired cognitive function.

If you've experienced a very sudden weight gain, you may have gluten intolerance. Gluten can cause rapid fluctuations in weight, and also causes inflammation of the body. Individuals with gluten sensitivity should simply avoid gluten products in order to stabilize their weight.

A recent study claims to have found a direct link between gluten intolerance and a condition called "aphthous stomatitis." This condition causes ulcers and canker sores. Furthermore, the impaired nutrient absorption caused by ingesting gluten leads to reduced levels of important minerals like calcium, which is essential for healthy bones and teeth.

Many sufferers of gluten intolerance also report suffering from conditions like eczema, acne, and dermatitis herpetiformis (DH). This condition results in the formation of itchy, red rashes and blisters on the skin.
Remember to SHARE this important health information with your family and friends.
H/T: Healthy Food House
Posted by Unknown at 6:38 AM