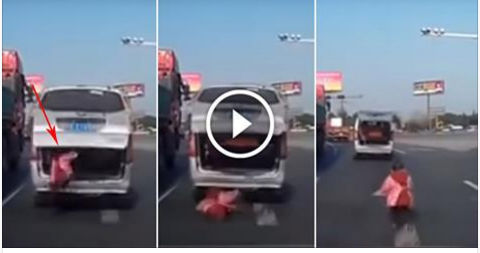 This is the scary moment when a toddler suddenly falls out of the back of a van onto a busy highway full of huge vehicles. The incident happened near Wujiang, Jiangsu province and was captured in a dashboard camera.


The insane footage shows the exact moment the young lad tumbles out of the van as soon as the traffic light turns green.

The child tried his best to run after the vehicle, but the van disappeared instantly, leaving the poor kid wandering on the dangerous road.

Fortunately, the people in the car behind followed the child and took him to safety. Eventually, the grandfather of the 2-year-old kid, Yang Defu, realized what happened and hurried back to look for the lost child.

Du Xiuli was then honored in a ceremony for her heroic act, but insists ‘that it is what any mother would do.’


Apparently, according to Yang, the grandfather, the van‘s back door had been malfunctioning after the previous collision, as a result, it occasionally and randomly opens on its own. He also said that, his grandchild had climbed over the back seat when the freaky incident happened.
Via: Shanghaiist
Posted by Unknown at 5:59 AM