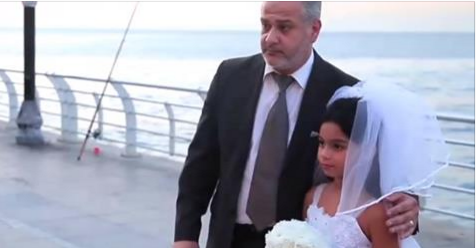 Every year 15 million girls are married as children, denied their rights to health, education and opportunity, and robbed of their childhood. If we do nothing, by 2030, an estimated 15.4 million girls a year will marry as children.
Every child deserves to enjoy their childhood by playing and studying. When these young girls are married off too soon, their entire wellbeing and personal development are in danger. They are often disempowered and will remain dependent on their older husbands. They are neither physically nor emotionally ready to become mothers and wives, and yet they are forced into such a life.
KAFA, which means ‘enough’ in Arabic, is a charity which aims to “create a society that is free of social, economic and legal patriarchal structures that discriminate against women.” They created this social experiment to see how people react to seeing a child bride being married off to an old man.
The video was filmed in Lebanon, where parents and families allow child brides to be married off at a very young age of 9.

source   www.viral4real.com
Posted by Unknown at 8:27 AM