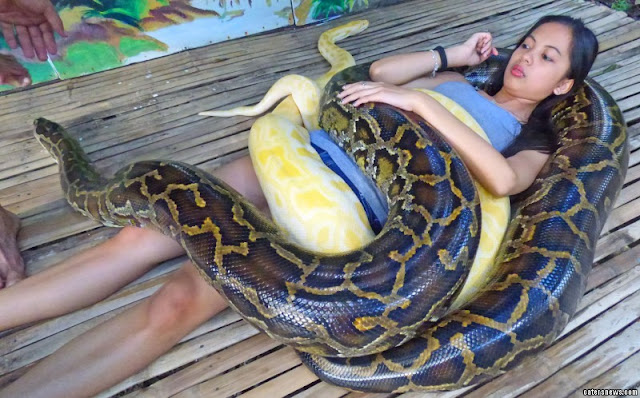 I personally am not a snake guy, never have been and will probably never will be. I am not alone however, millions of people are afraid of snakes, some more than others. With that said, if given the opportunity to confront your fear of snakes head on and in a BIG way…would you?
Well, one girl did just that.
Meet Sunshine, a young 19-year-old girl from the Philippines who suffers from a long-standing phobia of snakes and in order to try and change that she ended up agreeing to sit through a snake ‘massage’ to face those fears head on.


Even if you didn’t have a fear of snakes, many would not attempt what Sunshine did! Yikes!
Check it out below…it will make your skin crawl for sure!
The idea was originally given to her by photographer Ian Maclean, who helped her get the whole thing set up and sat with her to record the entire process. Before you start worrying that these absolutely massive pythons would see her as their next meal, they were each fed an incredibly large meal of ten chickens each; for those unfamiliar with how snakes can be after a meal like that, well, they can basically turn into the most lovable creatures on the planet when used to human contact.

source    awesomejelly.com
Posted by Unknown at 8:20 AM