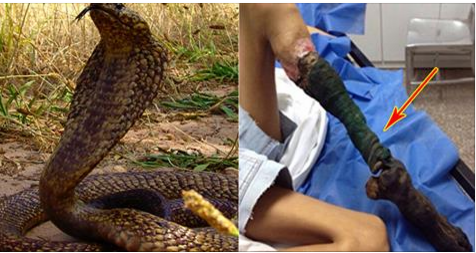 We’ve always been told how dangerous snakebites are. Yes, not all snakes are venomous though if they are, they can kill you in an instant. And one girl was crippled in a bizarre way after being bitten by a snake.

An unidentified 13-year-old girl from Venezuela was bitten by a snake which caused a laceration to an artery in her leg. The bleeding resulted to a compartment syndrome. When compartment pressure rises due to injury, adequate blood flow to tissues is prevented. Severe tissue damage can result with loss of body function or even death.
The snake’s venom caused severe necrosis. Necrosis is the death of cells through injury in a localized area of a tissue or organ.

This caused her leg tissue to die leaving it withered and rotten. It has shrivelled and turned completely black.

She was initially treated with remedies from her indigenous culture. Eventually, she was brought to a hospital in Carcaras after a month for medical treatment. However, her leg will have to be amputated due to the severe tissue necrosis. Still, this may cause her life due to the nature of the poison.

According to Dr. Arun Ghosh, snake venom is complicated and it depends on the snake species.

“The whole lower leg is black. It’s spreading up. Looking at the rest of her body she’s showing signs of muscle wastage from the poison. Her other leg is thin. It’s likely she will die.”
Furthermore, her condition has led to rhabdomyolysis. Rhabdomyolysis is the breakdown of muscle tissue that leads to the release of muscle fiber contents into the blood. These substances are harmful to the kidney and often cause kidney damage. Coupled with low blood pressure, this may even cause death.
Also, she was unlikely given any anti-venom treatment which could have controlled the poison, which contains agents that paralyze the nerves and cause the blood to clot. It was also reported that she incurred an elbow fracture during the incident.
This case only shows that we should never neglect snake bites. Always seek prompt medical attention if suffered a bite.