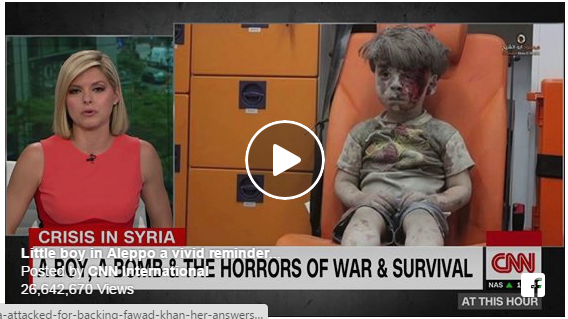 Five-year-old Omran Daqneesh was rescued from the rubble caused following an airstrike by Russian or government warplanes on the rebel-held neighborhood of Qaterji.

Almost a year after the world was haunted by the image of the three-year-old Syrian boy Alan Kurdi who drowned in the Mediterranean Sea, another image of a young boy has captured the horror of the ongoing war in Syria.
Five-year-old Omran Daqneesh was rescued from the rubble of a building that fell down following an airstrike in the rebel-held neighborhood of Qaterji. He was taken immediately to an ambulance where he was seen sitting, dazed and confused. The image of the stunned and weary-looking boy, sitting in an ambulance caked with dust and with blood on his face, captured the horror that has beset the war-torn northern city as photographs of the child were widely shared on social media. An hour after his rescue, the badly damaged building, the boy was in, completely collapsed.
The boy suffered head wounds but no brain injury, and was later discharged. Rescue workers and journalists arrived shortly after the strike and described pulling victims from the rubble.
A CNN television anchor, airing a report on the boy, turned emotional as she started to talk about him. Kate Bolduan started by saying “According to activists, this, is Omran ” and her voice started to break. She took a long pause, trying to compose herself before she starts narrating the story of the little boy.
As she talked about his family, the report showed visuals of the boy as her voice kept trembling while she tried to hold back tears.
“He was with his mom and dad, his brother and his sister. Their home is in Aleppo, Syria. It was hit by a bomb, in an airstrike,” she continued, elaborating on the details of how the boy was found.

The report then cuts to a video of the boy being fished out from the rubble and being transferred to the ambulance.
“Omran is left inside the ambulance alone, bloodied as rescuers go back into the rubble looking for anyone else who may have survived,” she continued after the video.
She concludes the report by saying that what frightens her is that there are tears in the newsroom but not on the boy.
“He doesn’t cry once. That little boy is in total shock. he is stunned. Inside his home one moment and the next, lost in the fury of war and chaos. At least three people were killed by this bomb in this neighbourhood. This is Omran. He’s alive. We wanted you to know,” she concluded as she broke down completely.

source   indianexpress.com
Posted by Unknown at 9:00 AM