Home » »Unlabelled » A Couple Saw This Poor Man On The Street, What They Did Next Is Remarkable

A Couple Saw This Poor Man On The Street, What They Did Next Is Remarkable 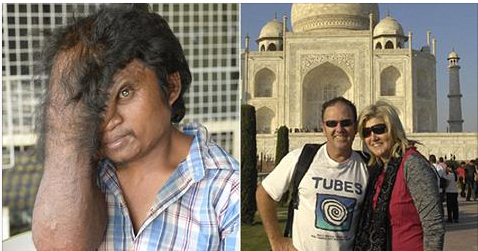 Living a life where people despised and humiliated you must be really hard. This is the tragic life of a 34-year-old Cambodian man named Vid whose half of his face is covered with a huge hairy mass. Due to his condition people often mock and shoo him in the street, rejecting him. Fortunately, two tourists made a heartfelt campaign to help him.


Vid was born with a growth that has grown and hangs below his chin, completely covering the right side of his face.

It is believed that he is deserted by his family, homeless, and unemployed.

Despite having a huge growth covering his right face, Vid can see on the other eye, he can breathe normally and can also walk around by himself.

While walking on the street, he was spotted on by Australian couple Diana Koski and her husband John Nettleton who were enjoying their vacation in Phnom Penh.

And the moment the tourists saw him, they knew they have to help the poor man.

Diana said, “He just walked past us in the street near our hotel and it took us by surprise. I said to my husband we have to help this man. I started talking to him, but it was difficult because he didn’t speak English. A few of the local people who we had seen shooing him away before came over to help translate. I told him I’d like to try and help him.”

The couple brought Vid back to the Monsoon Boutique Hotel where manager Chan Southun, helped them find out how they could assist him.

Diana added, “Whenever I walked with Vid, he walked seven paces behind me. Locals would try and shoo him away. Some of the locals tried to stop him walking in our hotel. He doesn’t beg, he just walks the streets. I imagine he has had a pretty tough life.”

The couple then posted Vid’s photo on Facebook asking if anyone knew a plastic surgeon or any other way to help.

Luckily, a Perth businessman immediately contacted the couple and now coordinating with a highly skilled plastic surgeon he knows in Singapore. But before Vid undergoes for a surgery, they first asked permission from the chief of the village where he was born and eventually was granted.
Ms Koski said, “Vid didn’t talk about family or whether he had a place to live. He must not have parents if we had to get permission from the village. When I asked him if he wanted to have the growth removed, he said yes instantly. I didn’t know if he would be frightened to go to another country. I told him we would do what we can, but it could take months. He has quite a sense of humor. He said maybe the girls might be interested in him if the growth is removed.”
Good thing Vid’s growth doesn’t give him headaches nor he thinks it’s heavy. Now all they need is his medical records which they will send onto the surgeon to see if removing the growth is possible. And if the surgery is possible and the surgeon agrees, the couple will get a visa, passport and air fares for Vid.
Stories like this are truly uplifting, thanks to these goodhearted people who are willing to help despite being a stranger to another country. Good luck to your surgery mate.
Via: Daily Mail
Posted by Unknown at 7:35 AM