Home » »Unlabelled » Homeless Man Gives Everything in His Pocket to This College Student—Here’s why!

Homeless Man Gives Everything in His Pocket to This College Student—Here’s why!

Those who have less, give more.
More often than not, people ignore others who are in need of financial help. Even if these people can if they want to, they refuse—especially when the problem doesn’t really concern them. While the rich refuse to help, those who are poor who almost have nothing, are the ones who give. This was what Brazilian Carolina Santana experienced first-hand, and she wanted the world to know the story.
A homeless man approached her and asked for spare change. Almost immediately, she rummaged through her bag and looked for her purse. To her horror, her purse and her bus pass were both missing! She was apologetic towards the homeless man, and told him about her situation. As a matter of fact, she will need to walk because she had no money and bus pass with her.
In a heart-warming moment, the homeless man told her, “Do you know how much the ticket is? Because I have $4 and I’ll be happy to give it to you.” 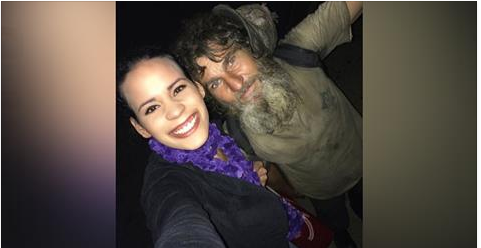 She was in awe, but declined the offer, knowing the homeless man needed that money more. She also found her bus pass shortly after, knowing she didn’t need to take the man’s money. Unfortunately, she had nothing else aside from her bus pass, and couldn’t give the man anything else. Instead, she posted a photo of the man on social media, letting the world know how big his heart is!
They say that the most generous people are those who experienced deprivation. They are the ones who know how it feels being at the very bottom of their lives—and they intend to help people who are in the same situation, despite having nothing themselves.