Home » »Unlabelled » It Seems Like An Ordinary Photo Of A Kid Playing, But Look Closely On What He’s Holding… OMG!

It Seems Like An Ordinary Photo Of A Kid Playing, But Look Closely On What He’s Holding… OMG! 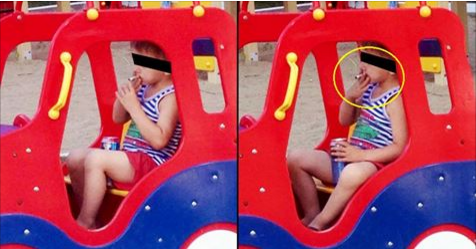 Shocking photo of a child smoking cigarette and drinking beer while playing in a playground has made the internet furious. The photo of the young tot, believed to be around 5-years old, was taken by a passer-by in the Russian city of Tyumen, in the oil-rich Oblast region.


At first glance, it seems like an ordinary photo taken in a playground with a boy playing in a toy car.

Apparently the kid is imitating a grown up, as it shows how he lit the cigarette with a can of beer between his legs.

The photo has been shared on social media, with a caption: “I wonder if his parents are watching?”
It instantly went viral across Russia and garnered negative reactions. Internet users quickly put the blame on the parents with one user saying, “Small kids copy everything that caught their attention. There wasn’t anything like that back in the Soviet times.”
Meanwhile, the identity of the child is still a mystery and it is unknown if the local authorities are following up the case. — via The Sun
Posted by Unknown at 3:51 AM