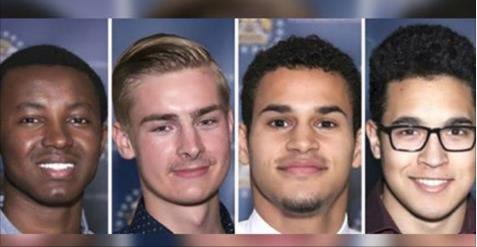 Here’s a well deserved letter to the “4 heroes on skateboards.” They observed a situation that will forever haunt them and remind them that evil does exist in the world.
Thankfully they didn’t turn their heads and look the other way. Thankfully they didn’t assume that the world was all roses and that this guy was an honest individual. They trusted their gut and sprang to action when the worst case scenario turned out to be a reality.
It’s tempting to look the other way, wanting to believe that everything is on the up and up. These guys indeed wanted to believe that, but they knew better. And that made all the difference in this situation.
Check out this powerful letter to find out how this situation went down and why these skateboarders are true heroes.
“To the 4 Heroes on Skateboards,
Arnaud Nimenya, Carsyn Wright, James Hielema and Starlyn Rivas-Perez, I don’t have any acquaintance with you, but thank you.
When you saw a sharp looking man bringing an drunk young woman through a parking structure in Calgary, thank you for being concerned.
When you heard her begin shouting and hollering, thank you for stopping to ask why.
When he let you know that he was attempting to call her father to lift her up, thank you for being aware in assuming the best about an outsider however staying suspicious at any rate.
“You don’t want to really think of the worst in somebody like that,” you said. “You don’t want the situation to be real, so you just brush it off and hope for the best.”
But thank you for doing the exact opposite when your gut intuition told you something was dead wrong.

When he took her back into that nearby stairwell, thank you for following him to check on her.
And when you discovered the “worst in somebody” unfold before your very eyes and saw him sexually assaulting that 15-year-old girl against the stairs, thank you for not letting him get away.
Like true heroes, three of you ran after her attacker and one of you stayed behind to comfort the helpless young teen shaken with fear at the brutal loss of her innocence.
You can’t take away what happened to her, but you can show her that for every Brock Turner, there is a Swede on a bike waiting to come to her rescue. For every group of men who will stand around gawking at a man raping an unconscious woman behind a dumpster and doing NOTHING, there is a group of men who will stop it in its tracks and chase down that pervert until he’s restrained by the cops and justice is served.
For every man who wants to violate and dispose of her like a worthless rag doll, there is a man who will cherish her for the treasure she is and a daughter of the most high King—one who will say:
I’m so sorry.
You are not just “20 minutes of action.” You are not some girl at a party. You are not alone in your fight.
I’m single. I’m male. I’m in my 20s. I respect you. I grieve with you.
I don’t want you to think, not even for a second, that you “asked for it” or that any of this is “your fault.” As men, it’s our job to protect women regardless of what they wear or how much they drink.

In a society that encourages casual sex, demeaning women and rape culture, thank you for showing us that there are still good men out there.
Thank you for doing the right thing, being a protector for the defenseless, and for being the voice that said “NO” when hers was not loud enough.”
Gratefully,
Kelsey
source   damn.com
Posted by Unknown at 10:05 AM