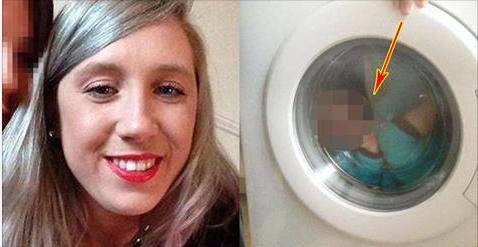 Do you remember Alfie? The boy who was dragged face down at a store by his parents because he was tired. How about the naked boy put on leash, treated and fed like a dog by his mother just for fun? These two incidents divided netizens opinions, when one is clearly just a kid’s thing while the other is totally a despicable act. And now, one mother is in hot water after posting a photo of her two-and-a-half-year-old son inside a washing machine.

Courtney Stewart, 21, from Erskine, Renfrewshire was questioned by the police after someone reported her for posting a photo of her son with Down Syndrome trapped inside a washing machine, on her Facebook page…for a laugh!

But Courtney told the police that her son climbed into the machine on his own.

image credit
She also told The Daily Record, “He loves the washing machine. We took a picture and it was a laugh.”
“He is clearly laughing in the pictures. So I don’t understand why somebody took that picture as – well, I don’t know what they took it as.
‘What did they think I was doing to him? Taking him for a spin? He’s got a bit of a washing obsession. Anyone who knows him would know he’s got a washing obsession.
‘I don’t know who reported it. I don’t really know why they would do that. I think it’s absolutely ridiculous. They shouldn’t be able to call the police anonymously.
‘The police know who it was and I don’t think it’s at all fair that they can’t tell me.” she added.
Courtney insisted there was no way the boy could have come to harm, as the door was not closed right over and the machine was also unplugged.

It can also be seen in this photo that a hand is holding it shut.

image credit
However, her neighbors were not amused with one saying, “It was terrible to look at. For anyone, let alone someone who is also a parent, to take a picture like that and stick it on Facebook for a laugh is unbelievable.”
“It’s no wonder people are angry about it. People in the town have been talking about it, because anyone who has seen it has been left shocked.”
Since the posting of the picture, Courtney claimed she had been attacked on her doorstep over the picture.
Sources: Daily Record, Metro
Posted by Unknown at 6:48 PM