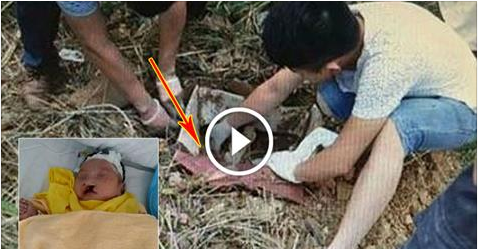 The rising numbers of abandoned babies are disturbingly alarming. However, it seems like heaven is guiding these little angels as there are improbable stories of newborns surviving against all odds. Just like the story of this newborn baby boy who was abandoned and buried alive for eight days in an unmarked grave in China but miraculously survived.

A middle-aged woman named Lu Fenglian was collecting herbs for Chinese medicine on the mountain of Tian Dong County when she suddenly heard a child crying coming from beneath the earth.

Fearing that she had stumbled upon “spirits”, she immediately ran to a Buddhist temple for help.

cnn
Fenglian together with the 75-year-old Monk Zhao Shimin immediately returned to the scene where she heard the cries. But the monk soon realized that a child must have been buried underground where there are numerous unnamed graves.
The monk immediately called the police who later arrived and began digging up, until they located the child buried five centimeters below the surface.

The baby was in a cardboard box and was covered in earth and soil with some blankets and other items of clothing found inside.

Miraculously, the baby was found alive after being buried for eight days! Apparently, the newborn was abandoned and left to die by his parents because he has a cleft lip.

whatsonxiamen
The 5.9 pound baby was then rushed to Tian Dong County People’s Hospital where he received emergency medical treatment. The poor kid was in critical condition when he first came at the hospital — coughing up mud, his whole body covered in scratches and bruises — so he had to be incubated for several days.
However, doctors were stunned by the baby’s amazing survival. Authorities said the it’s the rainwater and air which seeped through the loosely covered rocky ground that kept him alive during those eight gruesome days.
According to Monk Zhao, many people choose to be buried in the Feng Long Ridge area due to its good Feng Shui. “The baby was buried among numerous unmarked graves and was still found alive, so he must be blessed.” he added.

Police traced the parents of the baby who happens to be a young couple from nearby Siping Village in Ping Ma town.
According to CNN report, the family including the baby’s grandmothers allegedly hired a man for $290 to get rid of the baby. The police arrested five people for attempted murder including the baby’s parents, both of his grandmothers and the man they hired to kill the newborn.
But the baby’s parents were released on bail and are now trying to have him back. They even wrote a letter of apology with a promise not to hurt him.
“We worry that the baby’s parents may hurt him again,” Zhou Liying, head of the county’s Civil Affairs Bureau said. “Even though they will not, this tragedy may haunt the family and affect the boy’s mental health.” she added.


Just because of a simple deformity these heartless parents easily abandoned their child as if he was nothing. Angels like him should be kept in the loving arms of their parents no matter what he looked like. It should the parents who must accept them in the first place.
H/T: Daily Mail, CNN
Posted by Unknown at 11:04 PM