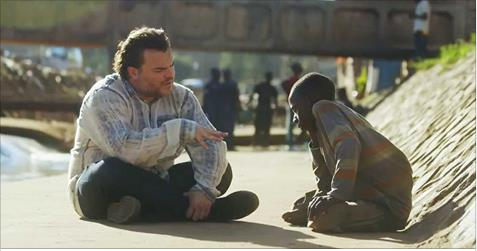 part of the Red Nose Day campaign, actor-comedian Jack Black travelled to Uganda to meet with underprivileged children. The campaign aims to raise money for children and young adults who live in poverty. Below, Jack meets with Felix, a 12-year-old who is forced to live on the streets.

At the start of the video, Black makes a promise that viewers that he will do his best not to cry, but that proves difficult. While visiting an impoverished community in Uganda, Black discusses the good he sees in the people and town, though it's tarnished by desperation and danger. "It's no place for a kid to grow up," he says, fighting back tears.
According to information presented in the video, there are up to 150 million children living in the streets all over the world. Jack Black meets with one of them, Felix, who talks about his past and what led to his life on the streets. Felix lost his mother at a young age, and he never met his father. He has brothers and sisters, he says, but he doesn't know where they are.

Black, a father, is overcome by emotion as he listens to the boy. Felix tells Black that his ultimate wish is for an education. "He wants an education, and I think that's not a lot to ask," the actor says. If you want to learn more about the Red Nose Day campaign, you can visit their website and learn what a donation can do for those like Felix around the world. If you were touched by this video, please share it with your family and friends.