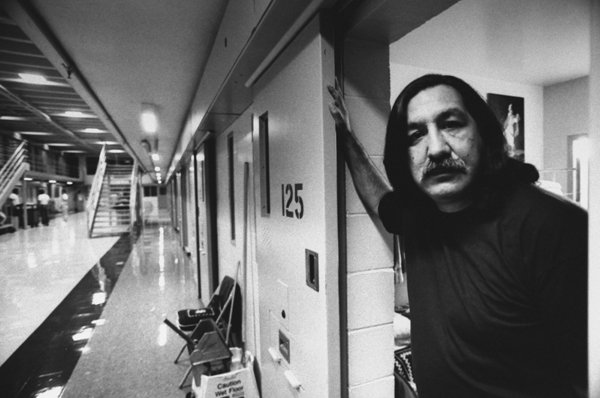 This past Wednesday, it was reported that now former President Obama denied a prisoner’s request for clemency.


Obama goes down in history as being the president to grant the most commutations ever, making his decision to deny an application by Native American Leonard Peltier, who was convicted of killing two FBI agents during a shootout at South Dakota’s Pine Ridge reservation in 1975, shocking.
The 72-year-old reportedly has failing health, and advocates for Peltier worry that the denial to grant clemency may be what ensures he dies behind bars.
The administration’s Office of the Pardon Attorney told Peltier’s attorney via email: “The application for commutation of sentence of your client, Mr. Leonard Peltier, was carefully considered in this Department and the White House, and the decision was reached that favorable action is not warranted.”
Of the results, Margaret Huang, executive director of Amnesty International USA, said:
We are deeply saddened by the news that President Obama will not let Leonard go home. Despite serious concerns about the fairness of legal proceedings that led to his trial and conviction, Peltier was imprisoned for more than 40 years. He has always maintained his innocence. The families of the FBI agents who were killed during the 1975 confrontation between the FBI and American Indian Movement (AIM) members have a right to justice, but justice will not be served by Peltier’s continued imprisonment.

Peltier is currently serving two consecutive life sentences. At the time of his arrest, he was a leading member of the American Indian Movement, an advocacy group and movement concerned with Native American rights. During a confrontation in 1975 with AIM members, two FBI agents were killed. Peltier was convicted of their murders. Despite his years behind bars, he has always maintained his innocence.
Peltier’s petition for release on parole was denied by the U.S. Parole Commission in 2009. They have repeatedly denied parole for him, claiming that he did not accept criminal responsibility for the murders he committed. And yet, in one hearing, the Commission said that “the prosecution has conceded the lack of any direct evidence that you personally participated in the executions of two FBI agents.”
Many had signed petitions online seeking clemency for Peltier, including a letter from the chairman of the Oglala Sioux tribe that also went to Obama, which read: “Mr. Peltier is a 72-year-old Dakota elder, a great great grandfather, who has never had the chance to sit and enjoy his children, grandchildren, and great great grandchildren as he’s been locked up for over 41 years…Let him spend his last years with his family and friends.”
Peltier suffers from diabetes, and was recently diagnosed with an abdominal aortic aneurysm. He has spent over 40 years in prison, and due to his condition, Amnesty believes his release from prison should be on humanitarian grounds and in the interests of justice.
Obama’s decision has generated strong reaction on social media among supporters of Peltier. He has come to be viewed by many as an international symbol of the mistreatment of Native Americans by the U.S. criminal justice system. But others view him as a murderer of two FBI agents, and support the denial of clemency because he should continue to pay his debt to society.