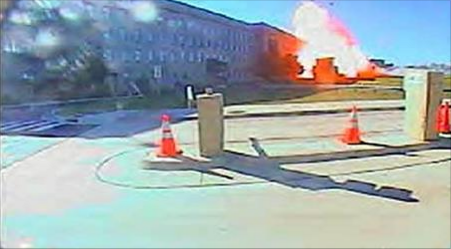 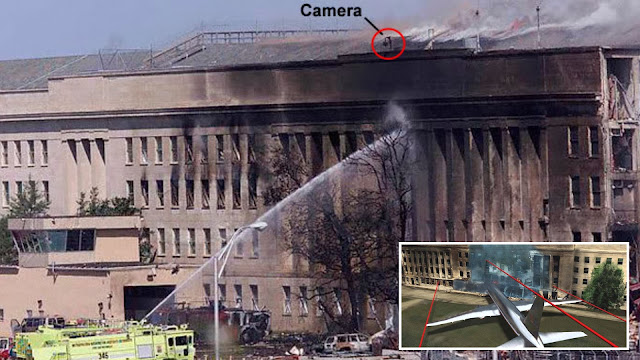 By: Anonymous 23
Now, since I’ve been researching into September 11th, 2001, I’ve noticed peculiar things about the Pentagon that are very interesting like the Pentagon confiscating the video from the gas station across the street, and the video from a hotel had their video confiscated as well. That was the rumors online anyway.
The gas station ended up suing to retrieve their video. Now, the Pentagon has many videos outside focused in on the parking lot and other aspects surrounding the building. Supposedly, there are 86 outside cameras. Only one 5 frame video was released to the public, and it barely showed a plane.
Many people wanted the Pentagon to release the other security tapes that was shot outside of the Pentagon. Well, that never happened. Now, why would they confiscate video from the Gas Station from across the street on 09/11/01? Of course, they also confiscated video from the Sheritan National Hotel as well from what people have reported online. Why confiscate their surveillance videos? Don’t they have enough cameras at the Pentagon. Was the confiscation of these videos to cover up their tracks? I guess we may never know now. “Cover Ups” seem to become an every day occurrence these days.

Eric Griffiths via quro reports:
Eyewitness accounts are contradictory; it must be up to you to decide which to believe.
The most credible seems to be that of Samuel Danner (TOTAL 911 INFO):

When he was in front of the Pentagon, traffic began to slow down. Danner noticed  an airplane in the distance. He knew about the attack on the WTC, and he pulled  over and got out of his car. He noticed a small aircraft in the distance coming  towards him […] A couple seconds later the […] aircraft passes in front of him. He describes  it as a white aircraft about the size of Gulfstream 300. The front was like a  humpback whale. It was flying very low to the ground […] There was only one engine, and it was in the tail.

He is describing a military UAV, the Global Hawk: 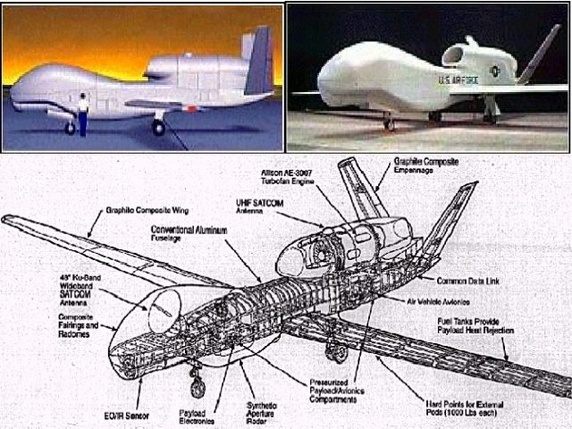 He describes it as a white aircraft about the size of Gulfstream 300. The front was like a humpback whale. It was flying very low to the ground … There was only one engine, and it was in the tail … As other witnesses have said, the airplane seemed to be under perfect control. He did not notice any windows on the plane … He felt the air move as the aircraft flew by, but the aircraft was amazingly quiet … He saw some of the light poles that had been hit by the aircraft, but they seem to have fallen in the wrong direction, as if explosives knocked them down … Danner walked onto the Pentagon property to help the survivors, but he didn’t find any bodies or luggage … He joined the people who picked up scraps (see the photo at the top of this page)…  One of the other people assumed they were picking up scraps only to make it appear as if they were doing something useful; ie, in order to impress somebody important … All they found were bits of shredded aluminum and some type of polymer material with fibers … He saw tiny bits of aluminum, a few large pieces, and only one engine … (9/11 Pentagon Eyewitness Describes Having Seen Global Hawk *PIC*)

Insofar as video etc. is concerned, this is the most interesting I have found:


The damage to the Pentagon was also inconsistent with a 757 hitting it: 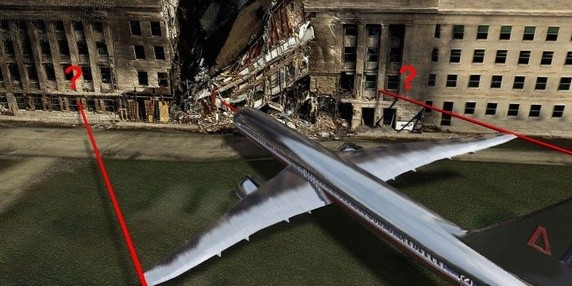 You might also want to ask yourself why there is no wreckage at the site of UA Flight 93 in Pennsylvania:

Or why Flight 175 can visually be identified as a military version of the 767 (New York Magazine)
Or the dismissed, multiple, credible reports of multiple explosions being heard at the WTC before the planes struck.
Or how jet fuel doesn’t burn hot enough to melt steel, yet the Twin Towers collapsed at a rate approaching free fall.
Or whatever happened to WTC 7, which, like the Twin Towers, appeared to collapse as though by controlled demolition, hours after the Twin Towers went down, without being struck by anything (BTW, the official 9/11 Commission report doesn’t even mention WTC 7.)
— And so on and so forth …
RELATED ITEMS:9/11