Home » »Unlabelled » Pretty Teen Is Voted Homecoming Queen, Then Pulls Off Her Crown And Gives It Away

Pretty Teen Is Voted Homecoming Queen, Then Pulls Off Her Crown And Gives It Away 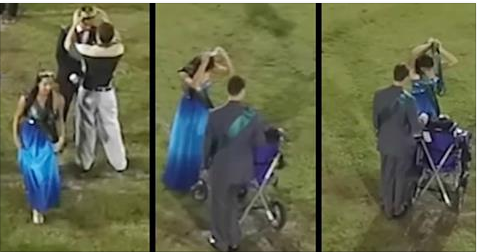 When Viera High School went to cast their ballots for homecoming court, a 17-year-old girl named Jazzmin Samuels was really hoping she’d win the day, and be crowned homecoming queen.
Jazzmin has severe cerebral palsy, and is confined to a wheelchair. She can only communicate by typing. While she has no mental handicap, she says that kids her own age don’t always understand that.


Much like this boy who shares her illness and has always struggled with bullies, Jazzmin says that people sometimes treat her differently. She hoped the homecoming crown might make a difference, and her friends actively campaigned for her to win, inspired by stories of other girls like Jazzmin successfully wining the crown.
But on the night of homecoming, a different girl was crowned queen, a fellow 17-year-old named Caia Gillet, who Jazzmin had never met before. But in a moment that both girls will undoubtedly remember for years to come, Caia showed true queenly grace, and instantly handed off her crown to her fellow nominee.
The beautiful moment made Jazzmin’s night. She later typed out, “I couldn’t believe it, it was awesome,” and her longtime aide Dona Jones said that the whole evening was a blast. Watch the breathtaking moment unfold below!
And if you were stunned by Caia’s sweet gesture and Jazzmin’s thrilled reaction, please SHARE on Facebook to spread the word about this moment of kindness!

source  www.littlethings.com
Posted by Unknown at 5:01 AM