Home » »Unlabelled » Before she died, she strapped her baby in a carseat and threw it out the window. The people who found it were left speechless

Before she died, she strapped her baby in a carseat and threw it out the window. The people who found it were left speechless 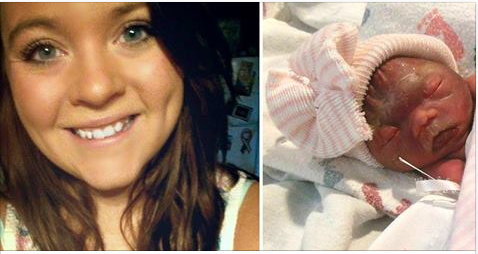 Wyoming, Illinois, is a small town with a population of about 1,400. It's safe to say that almost everyone knows everyone there, and that's exactly the kind of tight-knit community where 21-year-old Shelby Ann Carter wanted to have a family.
She and her fiancé lived with her mother. Shelby worked as a beautician and had started studying to become a pharmacy technician. Then, in January 2017, she gave birth to her daughter Keana Davis. Shelby was overjoyed and it looked like all was going well for the young mother and her family.
But unfortunately, her happiness was about to come to tragic end.

"She was making her mark in town," said the town's mayor. But on January 30 — only one day after her 21st birthday — tragedy struck. Shelby was at home with her daughter when a fire broke out. She called 911 for help and told them that she was having trouble breathing. She hadn't said anything about her child which led to some confusion when firefighters finally reached the scene.

Emergency responders found Shelby on the second floor of the house, but it was too late — she had died of carbon monoxide poisoning. But when they finally put out the flames and surveyed the scene, they found something truly astonishing: Shelby's 12-day-old daughter! What had happened?

Although the house was engulfed in flames, Shelby didn't let that stop her from doing all she could for her child. Finding herself and her daughter trapped on the second floor, she quickly came up with an ingenious idea and rescued Keana Davis by strapping her into a car seat and dropping her out of the window. Shelby had obviously used her last ounce of strength to make sure that her child survived.
"I guess it's the motherly instinct to take care of their young. We're all wondering why she didn't go out after the baby," explained the chief of the local volunteer fire department.

Keana Davis was rushed to the hospital where it was determined that she was completely unharmed. She was released to the custody of her relatives. Her mother was gone, but she still had a family.
After the accident, the community banded together and started a fundraising campaign to help the family rebuild their house and their lives. In only one week they were able to raise the target amount of $40,000.

Keana Davis will never have the chance to know her mother, but at least she can be proud of her. Shelby is a true hero and will be dearly remembered by her community for many years to come. What a wonderful response that their neighbors banded together to help them rebuild their lives as they come to terms with their loss.
Source hefty
Posted by Unknown at 1:20 AM