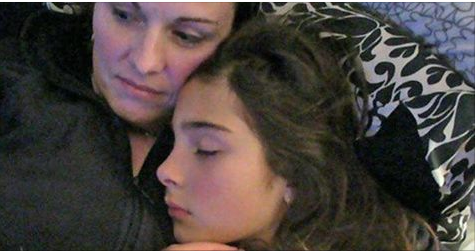 Linda Trevan has a broken heart and she knows that there's no way to fix it. She has experienced the worst thing any parent can — the loss of her child.
Linda's daughter Cassidy was only 13 when she was targeted by a group of girls at her school. “The bullying started with insults and she was punched once or twice in the face,” says Linda. But the situation quickly escalated.
The bullying continued with phone calls and comments on social media. It got so bad that Cassidy refused to go to school. She couldn't stand the thought of running into the bullies who were making her life so miserable. But after a period of therapy, the young girl felt a renewed confidence and was able to go back to school for two days a week. Things were looking better — the ringleader of the gang that had bullied her had even apologized and wanted to be friends with Cassidy.

At least that was what Cassidy thought when she followed her new “friends” to a house on February 15, 2014. The girls wanted to hang out with her after school and invited her along for some fun. As it turned out, it was all just a ruse to get Cassidy alone. When she entered the house, two boys attacked her and the horror began.
“They were older boys that Cass did not know. The two girls sat and waited. Two boys shared her and even timed them. Another boy was holding the door while the other two were raping her,” recalls Linda.
When Linda found out that her daughter had been raped by two 15-year-old boys, she was devastated. They went to the police, but Cassidy was so afraid of what the gang would do to her, she refused to give a statement. Without Cassidy's statement the police were unable to make a case and the charges were dropped. Yet, incredibly, that was not the end of the bullying. Even after the rape the girls continued to call Cassidy and harass her on social media. Seeing no other option, Linda and her daughter moved away so Cassidy to go to a different school.
But somehow this wasn't enough. Cassidy was so traumatized by the experience that she suffered from post-traumatic stress disorder. She couldn't eat or sleep properly and suffered constant panic attacks. Linda tried her best to help her daughter, but in the end there was nothing more she could do. At the age of 15, Cassidy decided to end her pain by taking her own life.
Linda's world was shattered. She knows she will never get over the loss, but a year after her daughter's suicide she was finally able to talk openly about their ordeal. At that point she decided to let everyone know what had happened and published this letter on her Facebook page:
It's such an unbelievable tragedy that a beautiful girl with her whole life ahead of her could have it destroyed by a few heartless kids. And the fact that none of the perpetrators of the bullying and rape were ever brought to justice makes this story even more tragic.
One can only hope that Linda's words reached their target and the people who took her daughter's will to live are haunted by shame and guilt for the rest of their lives.

Linda's words are touching yet difficult to read. The pain of this mother who lost her child because of the cruelty of others is truly harrowing.
Linda wrote the letter because she wants to raise awareness about bullying at school. Cassidy's story is one of thousands and there are many other kids out there who can hopefully still be saved. Let's hope that Linda's words reach them, their families and their schools in time.
source  www.hefty.co
Posted by Unknown at 9:10 AM