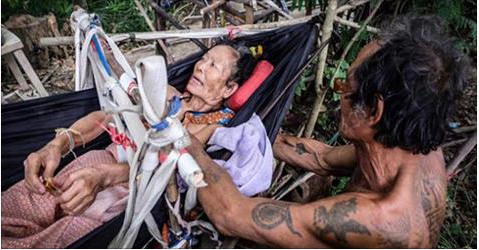 This is true love—in sickness and in health!
Every married couple promises to be with their partners, no matter how hard life is—as mentioned in their vows. This is the norm. Sadly, a lot of couples nowadays divorce and separate because the other half becomes incapable of producing for the family, or simply become incapable of doing anything. But for this Thai man, he would do anything for his bedridden wife, even if it means he has to sacrifice himself in the process.

According to reports, the man’s wife was bitten by a snake last year, which left the woman with muscle atrophy and rendered her immobile.

With this at hand, the woman couldn’t do anything but to stay in their small home in Sa Kaeo province, in eastern Thailand.

“We previously vowed to walk this life together. My wife is the most important person in my life, and I will never abandon her,” said the man.

The man couldn’t work away from home since he had to take care of his wife. Though they recieve 700 baht (S$28.40) in aid money and food donations from neighbours every month, it is obviously not enough to feed the both of them.

To make sure his wife is comfortable and will never go hungry, he feeds her first, and finishes whatever is left.

Because of this, the man hasn’t eaten a decent meal since his wife became bedridden.

Many netizens were touched by his story and decided to help him with whatever they can.

Netizens have given food and supplies for the couple, while others who cannot physically visit them sent money instead.

He said: “I may not have a beautiful house or car, but I have dedicated my heart and soul to my wife, and will never go back on my word.”

He added:“I believe my wife’s body will slowly recover. In life, you must always have hope.”