10-Yr-Old Prodigy Is Out to Prove Atheist Stephen Hawking Wrong: “God Does Exist” 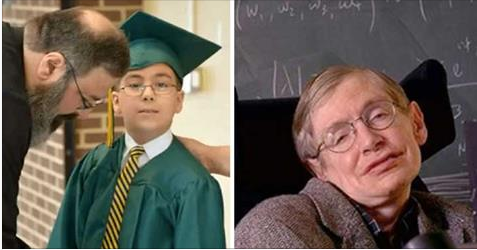 William Maillis is not your typical 10-year-old.

At an age when most kids are focused on beating the next level in a video game, or working toward actually hitting the ball in their baseball game on Saturday, William is consumed with becoming an astrophysicist.
Most kids dream of becoming a firefighter, a doctor, maybe an astronaut or a teacher, but William isn’t just dreaming of becoming an astrophysicist, he’s already becoming one.
The boy from Pennsylvania, graduated high school in May of 2016, at the age of 9. He is currently enrolled in community college classes with the plan of attending Carnegie Mellon University this fall.

According to his father, Peter Maillis, William began speaking in full sentences at just seven months old. He was doing addition at 21 months, and multiplication by the age of 2—a time when he was also reading children’s books, and writing his own nine-page book, “Happy Cat.” At four years old, he was learning algebra, sign language and how to read Greek, and when he was five, he read an entire 209-page geometry textbook in one night, and woke up solving circumference problems the next morning.

This kid is literally a GENIUS, and has been declared one by Ohio State University psychologist, Joanne Ruthsatz.

William’s desire to become an astrophysicist is rooted in his strong faith beliefs. He disagrees with some of Einstein and Hawking’s theories on black holes, and has his own ideas to prove about the existence of the universe.
The son of a Greek Orthodox Priest, William wants to prove that an outside force is the only thing capable of creating the universe, which means that “God does exist.”
Hawking, however, has a much different assertion. “Before we understood science, it was natural to believe that God created the universe, but now science offers a more convincing explanation,” said the renowned physicist. “What I meant by ‘we would know the mind of God’ is we would know everything that God would know if there was a God, but there isn’t. I’m an atheist.”

William’s parents say they have never pushed him toward his studies or this God-proving endeavor, but rather that he’s a pretty “normal” 10-year-old.
“We’re normal people,” Peter explained. “And he’s a normal kid. You can’t distinguish him from other 10-year-olds. He likes sports, television shows, the computer and video games like everyone else.”
Well I don’t know about you, but I’m pretty pumped to see this “normal,” God-fearing boy unravel the theory of one of the most prolific scientific minds of all time—for as stated by the great scientist Matthew Maury, “The Bible is true and science is true, and therefore each, if truly read, but proves the truth of the other.”

source  faithit.com
Posted by Unknown at 8:46 AM