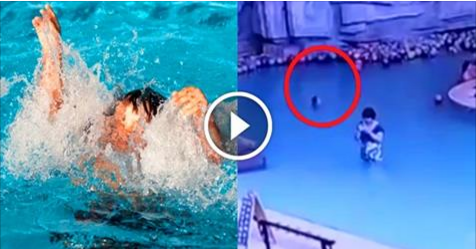 When swimming, it is very important to pay attention to the little ones to ensure their safety. This lesson was learned the hard way by a mom whose son drowned in the pool while she was too busy with her smartphone.

A 4-year-old boy’s life was cut short when he drowned in the pool area of a resort Shaanxi province, China. In the video footage of the heartbreaking tragedy, the young boy is seen splashing around the water, as if waving for help.

But his mom is too busy with her smartphone and doesn’t notice the poor kid.

Eventually, she puts her phone away to check on the boy. Unfortunately, she heads in the wrong direction.

He drowns just a few meters away!


Unable to find the little boy, she asks the resort’s staff for help but it is already too late. They found the boy’s lifeless body 30 minutes later.
According to Shanghaiist, the boy was trying to get help for 3 minutes before he drowned. Apparently, the location where the boy drowned has a 1-foot shallow area which sinks down to about 4 feet.
Via: The Asian Parent
Posted by Unknown at 5:40 PM