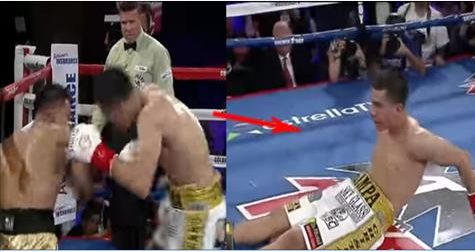 A Filipino boxer named Romero Duno has made a big impression after an upset victory over the heavy favorite undefeated Christian “Chimpa” Gonzalez in his debut fight in the US, on Friday, March 10, at Belasco Theater in Los Angeles.

The Duno versus Gonzalez lightweight fight is scheduled for 8 rounds for the vacant WBC Youth Intercontinental lightweight title.

The said bout only last two rounds, wherein the remaining 23 seconds of round 1, Gonzales got knocked down by Duno’s blinding cross.

Gonzales tried to stand up to meet up the ref’s count, but again like the first round, he fell back but this time without the ropes to support him and the referee stops the fight.


Duno, 21, had been in the US since December preparing for the fight against Gonzales at the Wild Card Gym in Los Angeles.
According to Duno’s promoter Jim Claude Manangquil of Sanman Promotions, “Duno trained really hard for this; ‘Chimpa’ underestimated him. We’re gonna celebrate now and will plan what’s next soon.”
Duno’s upset victory gave him the WBC Youth Intercontinental lightweight title with a record of 13-1, 12 knockouts, while Gonzales now has a lost with 16-1, 14 KOs record who leaves the ring on a stretcher.
Well, it seems I can see a rematch between the two young boxers.


source  www.wereblog.com
Posted by Unknown at 3:34 AM