Home » »Unlabelled » ‘Kill Em, Boy’: Guy Tells Pit Bull To Attack Cops, Dog Decides To Do Something A Different Instead

‘Kill Em, Boy’: Guy Tells Pit Bull To Attack Cops, Dog Decides To Do Something A Different Instead 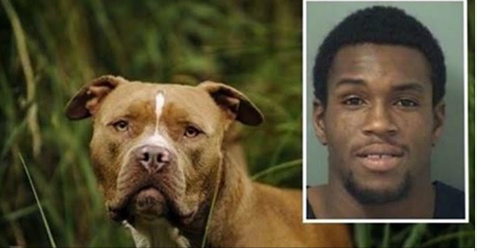 While investigating a burglary call in Riviera Beach, Florida, police officers saw Avery Davis, 26. Davis matched the description of the suspect and police noticed that he was carrying some packages. Davis also had his dog, a Pitbull, with him. Police ordered Davis to put the packages down, and the confrontation began.
Davis wasn’t going to go down easily. He started to run. The police stunned him with a stun gun, but he managed to get away again. Then Davis took the dog off the leash and told the dog to “kill’em boy.” The dog was probably a little confused with all the activity and didn’t exactly go after the police.
Take a look at this monster

The dog turned on Davis! The dog bit Davis in the buttocks and went for his head too. Davis was found later hiding under an SUV. What a good dog!
Share away, people!
Source  www.relayhero.com
Posted by Unknown at 9:11 AM