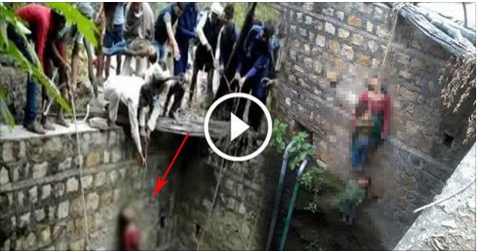 There’s no such thing as perfect marriage, couples are bound to engage and settled their differences to make things work out. However, cheating, jealousy, and domestic violence are toxins in a relationship that drives any good woman to quit. While there are some strong-willed women who will endure everything for the sake of their kids, there are some who are too wrecked to think what’s right. For 24-year-old Nirmala, taking her own life including her children is the only way out against his abusive husband.
It was in January 2015 when bodies of Nirmala and her two sons Lokesh, 5, and Mukesh, 3, were found hanging to death through the pillar of a well in Walpur Village of Alirajpur District Maghya Pradesh, India.

Ironically it was her husband who reported to the police that his family committed suicide.

Using a rudimentary blanket police and villagers recovered the bodies for post-mortem analysis.

Primary investigations revealed that the husband was a habitual drinker and often physically abused his wife. Some source says that instances of cheating might be also present. Though the initial reports are pointing to suicide because of marital abuse, authorities are not dismissing the angle of murder with the husband as the main suspect.


source  www.wereblog.com
Posted by Unknown at 5:02 AM