Home » »Unlabelled » This 45-year-old had 29 dolls in his apartment. But when the police took a closer look, they immediately arrested him.

This 45-year-old had 29 dolls in his apartment. But when the police took a closer look, they immediately arrested him. 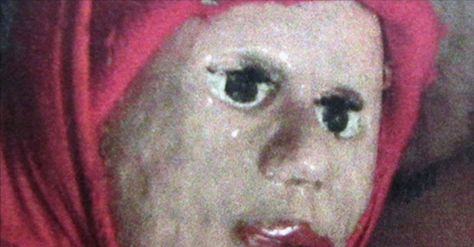 Warning: This article contains images and details that some readers may find disturbing.
In November of 2011, police searched the home of Anatoly Moskvin in Nizhny Novgorod, Russia. He was a well-known academic, author, and expert in the history of cemeteries. At first the police only wanted to talk to Anatoly and get some advice about a case they were working on, but when they looked around his apartment, they got suspicious.
A search soon revealed one of the most twisted and disturbing crimes in the history of Russia.
The 45-year-old lived in a small apartment with shelves on every wall stuffed with books, colorful children's clothing, and toys. It was the toys and clothing that had made the police so suspicious. Why would a childless man have things like that in his home?

In one room the police found several life-size dolls that had been carefully dressed and placed on the sofa, on chairs, and on the floor.
The smell and the puppets' strange appearance made the police curious. When they took a closer look, they made a terrifying discovery.
It turned out that the dolls weren't dolls at all — they were actually mummified bodies! Anatoly was arrested immediately and his gruesome secret was revealed to the entire country.
For more than 10 years Anatoly had been going to cemeteries in the middle of the night and digging up the bodies of recently buried girls and young women. He had taken them home and tried to mummify them, but when the embalming didn't work, he had taken them and put them back in their graves.

Anatoly cooperated with the authorities and confessed to digging up over 150 bodies. Of those, he had kept 29 that he had managed to mummify with some degree of success. He had embalmed the bodies by rubbing them with salt and baking soda, then stuffing them with cloth when they were dry.
Anatoly became know as "The Doll Maker" and the horrible details of his gruesome hobby soon came to light. He had prepared wax masks for the mummies and painted their faces with nail polish. He would dress them up and have tea or celebrate birthday parties. He even installed speaking mechanisms in some of his "dolls" to make them more lifelike. But Anatoly insisted that he had never done anything remotely sexual with his "girls" but had simply tried to give them the gift of eternal life.
Before police were even able to identify the bodies, a woman named Natalia Chardymova contacted them. She had seen the footage of Anatoly's apartment on the evening news and recognized one of the mummies: it was her 10-year-old daughter Olga, who had died one year earlier.
During the investigation Anatoly was asked to explain his grim fascination with mummies. He told them that, at the age of 13, he had lost a close friend, 11-year-old Natalia. He had gone to her funeral and was forced to give the dead girl a farewell kiss. It was an experience that had burned deeply into his psyche.
Anatoly's crimes sparked outrage throughout the country and the families of the victims were emotionally devastated when they had to bury their loved ones for a second time. But state prosecutors refused to charge Anatoly after he was declared unfit to stand trial due to his paranoid schizophrenia. Instead, Anatoly was confined to a psychiatric institute where he remains to this day.
The case of "The Doll Maker" shocked the entire world. The story sounds like something from a horror movie, but it is all too real and shows a dark side of humanity that most of us will hopefully never have to experience first hand. At least now, Anatoly's victims have a second chance to rest in peace.
source  www.hefty.co
Posted by Unknown at 7:20 AM