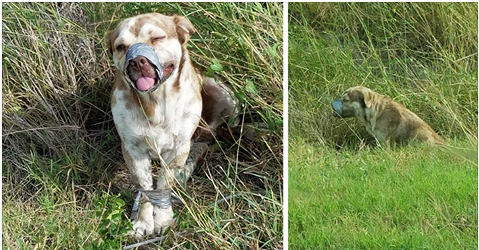 It was supposed to be just an ordinary commute to work for plumber Carlos Carillo and his colleague when they saw something unexpected in a ditch off the country road. “We didn’t know he was a dog at first,” Carrillo, an employee of Shoreline Plumbing in Texas, told The Dodo. “We reversed and saw him.” The doggie’s mouth was taped shut and he’d been tied up with tubing. He was clearly left there to die…
Carillo and his friend rushed to cut the pooch free. “He seemed OK,” said Carrillo. “He was very loving and liked the attention. He was probably just there for a day or so.”
The plumbers got the dog into their truck and took him to Peewee’s Pet Adoption, a nearby no-kill shelter. “Look at that face,” wrote Carrillo about how happy the dog seemed to be alive. “He knows he was saved!”
It turned out the dog was in good health despite having heartworms, for which they started a treatment. “His tail won’t stop wagging,” a spokesperson at the Peewee’s Pet Adoption told The Dodo. “He’s such a sweetheart.”
The person who so heartlessly left the dog to die wasn’t found, but at least thanks to the plumbers, the dog got a second chance at life. All he needs now is a loving forever home.
More info: Peewee’s Pet Adoption | Facebook (h/t: thedodo) source  www.boredpanda.com
Posted by Unknown at 6:02 AM