Encased in a glass covered coffin, placed in a wooden pedestal, this mummy is also called “The Sleeping Beauty”, her name is Rosalia Lombardo.

Rosalia Lombardo died on December 6, 1920, due to pneumonia. Rosalia’s father Mario Lombardo was sorely grieving on her sudden death. So he approached Alfredo Salafia, a well-respected embalmer in Sicily, he requested to preserve Rosalia’s body.

Almost a hundred years had passed, thanks to Salafia’s embalming techniques, the body is well-preserved even her internal organs are still intact. Poking above a blanket, her beautiful and peaceful face with a curly blond hair combined with a ribbon tied around her head makes her look like a 2-year-old girl taking a nap. But what makes her unique, creepy and hair-raising is that many believed that she still opens and closes her eyes many times especially during the day.

Here’s the time-lapse series of photos for two hours:

According to experts, there’s a perfectly reasonable explanation for this phenomenon. “It’s an optical illusion produced by the light that filters through the side windows, which during the day is subject to change. The mummy was moved slightly and shifted to a horizontal position in humidity-free glass. The new position makes it easier see Rosalia’s eyelids”. Also, Rosalia’s eyes are “not completely closed, and indeed they have never been.” 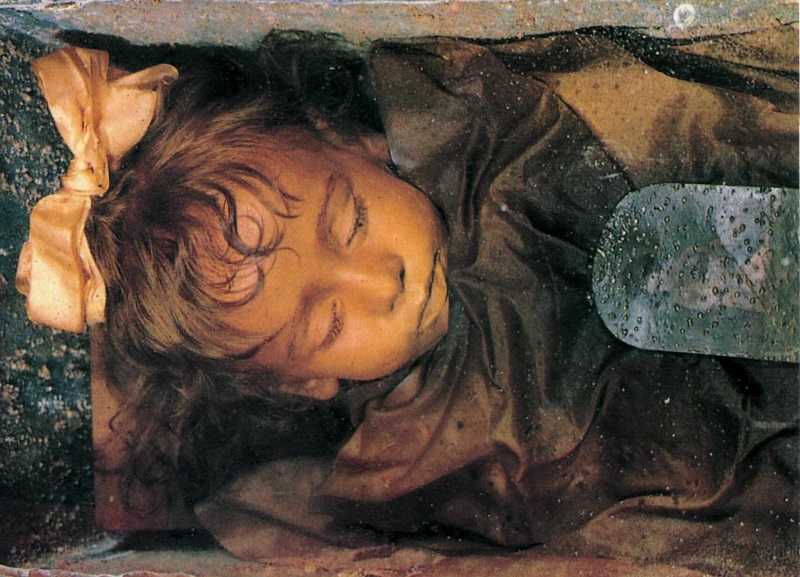 Watch the video below:

We really don’t know if this phenomenon is just an optical illusion or not. But we can’t deny the beauty that radiates from this well-preserved mummy. So what do you think?

source  peymus.com
Posted by Unknown at 8:11 AM