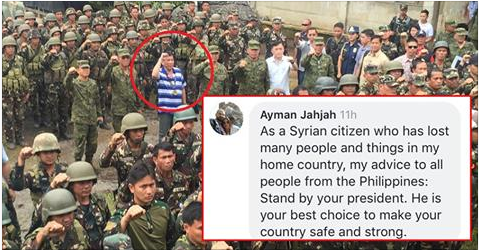 Martial Law has been declared in the whole region of Mindanao. However, political enemies and activists who are mostly from Luzon condemn the proclamation. So a Syrian national who lost everything in the hands of ISIS has urged Pinoys to support the President for his counter-terrorism effort.

Ayman Jahjah, a Syrian citizen, lost everything in his home country because of the terrorist group ISIS.
In his comment in Hidden Truth PH, he urges the Filipino people to support President Rodrigo Duterte in his counter-terrorism effort to prevent the international terrorist group to grow in Mindanao.

He said, “As a Syrian citizen who has lost many people and things in my home country, my advice to all people from the Philippines: Stand by your president. He is your best choice to make your country safe and strong.”

He also said that he admires’ President Duterte’s way of counter-terrorism and other organized crime and drugs.

Netizens who understand the current situation in Mindanao has praised Jahjah for his support to President Rodrigo Duterte, knowing first-hand the unwavering nightmare of terrorism.
Meanwhile, President Duterte is willing to declare Martial Law nationwide if the threat of terrorist group is confirmed Luzon and Visayas.
Via: Pinoy Trending
Posted by Unknown at 6:59 AM