After years of sweeping the issue under the rug and hoping no one would notice, the FDA has now finally admitted that chicken meat sold in the USA contains arsenic, a cancer-causing toxic chemical that’s fatal in high doses. But the real story is where this arsenic comes from: It’s added to the chicken feed on purpose!


Even worse, the FDA says its own research shows that the arsenic added to the chicken feed ends up in the chicken meat where it is consumed by humans. So for the last sixty years, American consumers who eat conventional chicken have been swallowing arsenic, a known cancer-causing chemical. 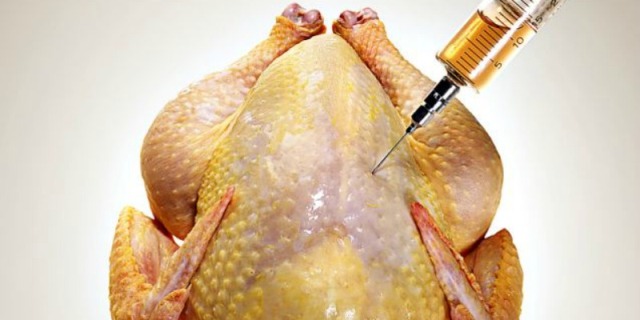 I don’t know about the rest of you, but lately my poultry purchases at my local market have become more and more of a ‘hit-and-miss’ situation, with more ‘misses’ if I’m being honest. As I bite into my homemade chicken nuggets or Coq au Vin (when I’m feeling fancy) I can’t help but feel that the chicken just tastes weird, stringy, just…funny. So a few days ago when I turned on the tube and saw the news headlines stating that the FDA has finally confirmed that chicken meat sold in the USA contains arsenic, my head, and stomach, nearly hit the roof.
This cancer-causing toxic chemical, that in high doses could kill you, is actually being added to chicken feed on purpose, giving store-bought chicken the illusion of healthy coloring and plump appearance. Shockingly, this is the case with more than 70 percent of all U.S. chickens! That is just awful!
The FDA has asked Pfizer to stop manufacturing the arsenic-containing drug, Roxarsone, that was found in the livers of nearly half of all chicken tested. According to the Wall Street Journal, “The agency said it recently conducted a study of 100 broiler chickens that detected inorganic arsenic at higher levels in the livers of chickens treated with 3-Nitro compared with untreated chickens … Pfizer said sale of 3-Nitro would be stopped by early July in order to allow animal producers to transition to other treatments.”
This urgent request by the FDA is surprising in itself as the agency has always maintained that the arsenic in chickens is at such low levels that it is safe for consumption, when meanwhile it has been clinically proven to be extremely toxic to human health, causing an array of neurological defects in developing fetuses and young children…Looks like the FDA finally got the memo, and not a moment too soon!
So, the next time you’re out buying chicken (if you’re not totally put off by it at this point) make sure you look out for the following:
-If the chicken meat is bright pink in color, like in an unnatural way, avoid it at all costs.
-Make sure that the fat content on the chicken is white to deep yellow, not gray or pasty.
-Check the date on the package.
-And finally, aim for “Certified Organic” meat products. It’s probably safest choice for you and your family.
Source: fda.gov
----------------------------------------------------------
Further read if you have spare time :)
Until this new study, both the poultry industry and the FDA denied that arsenic fed to chickens ended up in their meat. The fairytale excuse story we’ve all been fed for sixty years is that “the arsenic is excreted in the chicken feces.” There’s no scientific basis for making such a claim… it’s just what the poultry industry wanted everybody to believe.
But now the evidence is so undeniable that the manufacturer of the chicken feed product known as Roxarsone has decided to pull the product off the shelves . And what’s the name of this manufacturer that has been putting arsenic in the chicken feed for all these years? Pfizer, of course — the very same company that makes vaccines containing chemical adjuvants that are injected into children.


Technically, the company making the Roxarsone chicken feed is a subsidiary of Pfizer, called Alpharma LLC. Even though Alpharma now has agreed to pull this toxic feed chemical off the shelves in the United States, it says it won’t necessarily remove it from feed products in other countries unless it is forced by regulators to do so. As reported by AP:
“Scott Brown of Pfizer Animal Health’s Veterinary Medicine Research and Development division said the company also sells the ingredient in about a dozen other countries. He said Pfizer is reaching out to regulatory authorities in those countries and will decide whether to sell it on an individual basis.”

But even as its arsenic-containing product is pulled off the shelves, the FDA continues its campaign of denial, claiming arsenic in chickens is at such a low level that it’s still safe to eat. This is even as the FDA says arsenic is a carcinogen, meaning it increases the risk of cancer.
The National Chicken Council agrees with the FDA. In a statement issued in response to the news that Roxarsone would be pulled from feed store shelves, it stated, “Chicken is safe to eat” even while admitting arsenic was used in many flocks grown and sold as chicken meat in the United States.
What’s astonishing about all this is that the FDA tells consumers it’s safe to eat cancer-causing arsenic but it’sdangerous to drink elderberry juice! The FDA recently conducted an armed raid in an elderberry juice manufacturer, accusing it of the “crime” of selling “unapproved drugs.” Which drugs would those be? The elderberry juice, explains the FDA. You see, the elderberry juice magically becomes a “drug” if you tell people how it can help support good health.
The FDA has also gone after dozens of other companies for selling natural herbal products or nutritional products that enhance and support health. Plus, it’s waging a war on raw milk which it says is dangerous. So now in America, we have a food and drug regulatory agency that says it’s okay to eat arsenic, but dangerous to drink elderberry juice or raw milk.
Eat more poison, in other words, but don’t consume any healing foods. That’s the FDA, killing off Americans one meal at a time while protecting the profits of the very companies that are poisoning us with their deadly ingredients.
Oh, by the way, here’s another sweet little disturbing fact you probably didn’t know about hamburgers and conventional beef: Chicken litter containing arsenic is fed to cows in factory beef operations. So the arsenic that’s pooped out by the chickens gets consumed and concentrated in the tissues of cows, which is then ground into hamburger to be consumed by the clueless masses who don’t even know they’re eating second-hand chicken sh*t.

source  livingtraditionally.com
Posted by Unknown at 9:48 AM