Home » »Unlabelled » He Went Missing Without A Trace For Over 2 Years, Until They Found Him In A Place They Least Expected

He Went Missing Without A Trace For Over 2 Years, Until They Found Him In A Place They Least Expected 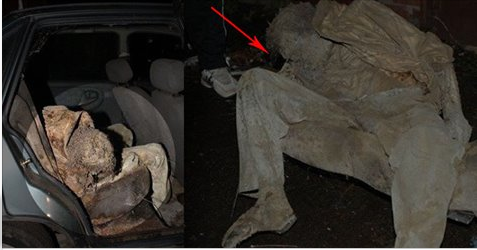 We’ve all heard stories of people disappearing without a trace and with stories like this, only few have a happy ending. But what’s hard in situations like this is, people are drawn into different conclusions and will be forever trapped from thinking if they are alive or not. One such story is about man from Moscow who suddenly went missing without any hint for two and a half years until one day his family shockingly found out that he’s just close by throughout the entire time.


During one fine day in the early 2000s, Andrey Gorbov suddenly vanished without telling anyone.

His family had no idea what happened to him, not even knowing his whereabouts and waited for years hoping for him to return or for someone to give any clues. Losing hope to ever find Andrey after two and a half years, his wife decided that it’s time to sell the garage where his husband kept his car. However, nothing could have prepared her for what she was about to found in there…

The missing man wasn’t kidnapped, nor murdered, but had actually committed suicide in the back of his car.

His remain was right there during the whole time, undisturbed and untouched. His body is already decomposed when his wife found him.

One for his kid which says: “Especially Kirill, forgive me. I am very bad father. Please, try to understand me.”

The second one states: “Natasha, thanks for all. Forgive me. Finally you get rid of me.”

While this letter include his last 5 wishes:
“Wishes: 1) Incineration 2) Do not take remains if you want 3) I don’t need funeral feast. I insist. 4) Don’t tell my mother. 5) Forget me.”

He even left a note for the police: “For Police Department. I am Gorbov Andrey in adequate condition turning on the engine of my car. There is no reason to blame somebody. This is suicide.”

I can’t imagine the anguish his family went through after they discovered him in a place they least expected. Maybe his fifth wish has been granted, as he has been almost forgotten for two and a half years. Somehow deep in his family’s heart, there’s always a place for him I think.
Via: Asian Town