Home » »Unlabelled » Man Dies In A Plane Crash, Comes Back To Life To Tell The World What He Saw

Man Dies In A Plane Crash, Comes Back To Life To Tell The World What He Saw 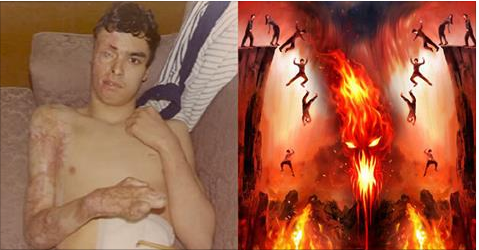 We all have different beliefs about death and the afterlife. Some of us think that death is the end of life. For others, death is not an end but a beginning of the journey to the Spirit World. There are also numerous cases of people who have died and came back to life, some even vividly remembering seeing heavenly realms. One man’s experience with death and the afterlife is one of a kind.

Mickey Robinson claims he had a near-death experience 47 years ago.


A professional skydiver, Robinson was going up for a practice jump when the plane’s engine stalled and crashed into an oak tree at 100mph.

He said: “With my leg sticking out what was now a hole inside of the fuselage, and with my hand I was pulling, but something had a hold of my equipment, and I was trapped. And I was soaked with airplane gasoline and on fire from head to toe.”

Luckily his friend was able to pull him out of the flames. It was then that he asked God for help.

Doctors said that his chances of survival were not good. He had head trauma, burns, lacerations and internal injuries. Then he felt his spirit being ejected out of his body.


“I felt a pressure on my right side just as I was about there. And I looked. I looked into something I can only describe as blacker, an abyss that was blacker than black. This was eternal. This thing, the more I looked at it, the more it closed to where I was almost by this white portal and it was eclipsing it and I cried out the same, clumsy, desperate thing I’d said in the ambulance, in the emergency room, on the operating table, ‘No God! I’m sorry. I want to live. I want to be alive.”


“And as those words gushed out, desperately out of my spirit, I was thrust through this white portal and instantly I was standing in the presence of Almighty God. And I knew I would never die. It transcended everything I knew or could imagine about the great things in the world. It went above and beyond all –anything I could imagine.”

He wanted to stay in heaven but he said he went back to his body.

“My spirit came back from the presence of God, came to the hospital, sank into my body, much like when a person would slip a glove on their hand. And I was so full of life and love. And around the bed was about a half a dozen doctors and nurses, and I had this ability to know what they were experiencing. And these people were terrified.”
After his ordeal, he began to experience miracles in his life. He was able to walk again after five years and the blindness in his right eye was restored.

He wanted to share the miracle of having a second chance at life so he became a motivational speaker.

He also wrote a book detailing his near-death experience entitled “Falling Into Heaven.”

Watch him talk about his incredible experience here:

What is your opinion about death and the afterlife? No matter what we believe, death is inevitable and no one knows when it will come so we must make the most out of life while we still can.
H/T: Mickey Robinson
Posted by Unknown at 8:41 AM