Home » »Unlabelled » She left her kids alone because of pain in her ovary. But when she saw them again she panicked.

She left her kids alone because of pain in her ovary. But when she saw them again she panicked. 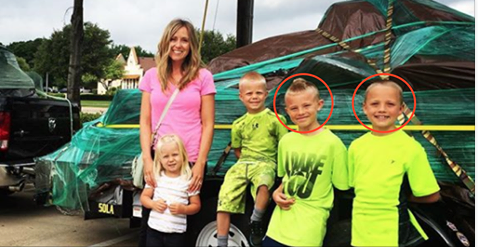 One of the greatest sorrows in life is to lose a child. That's why Jodie Norton, a mother of four from Utah, taught her kids a trick they could use in case of an emergency. Unfortunately, one day her 8 and 10-year-old sons had to put her lesson into practice.
Jodie woke up one morning and felt a searing pain in her left ovary. She immediately got into the car with the two boys and drove to the hospital. Once there, she called a neighbor and asked him to take the children to school while doctors examined her. While Jodie was being diagnosed with a ruptured ovarian cyst, her sons sat on a bench outside and waited.
SaveKidspot11Rachel StulenParenting
What Jodie could not have imagined was that it would take him 40 minutes to arrive. And it wasn't until later that afternoon, when the boys came home from school, that she found out what had actually happened during those 40 minutes.
While Jodie's sons were waiting, they were approached by a woman and two men, who asked them to follow them to the restroom and help them to convince whoever was in there to come out and see the doctor. "No, thanks," the boys replied over and over again when the three strangers insisted they follow them. "Please, you could save his life just by going to the restroom and talking to him," they kept repeating. The boys, however, did not move until finally Jodie's neighbor arrived. As they got into the car, the two boys saw a man come out of the restroom, join the other three and drive off.

That's the rule Jodie taught her children: an adult never asks a child for help. Jodie has a blog in which she posts advice to other parents on how to raise their children to be independent, safe and responsible with money. This mom's smart trick to catch dangerous people is so easy for parents to teach and for kids to remember that I've already taught it to mine!
source  www.cleverly.me
Posted by Unknown at 7:36 AM