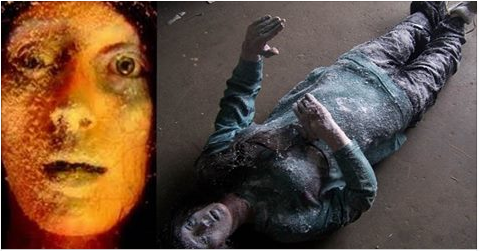 Lengby, Minnesota: During a heavy winter season on the 20th of December 1980, 19-year-old Jean Hilliard was on her way home from a friend’s house, when her car swerved and fell into a dike.

Stranded, she decided to go down the car and look for help as she knew someone who lived nearby.

She began walking against the frigid wind with 2 below zero temperature, two miles away from the home of her friend Wally Nelson but ended up collapsing and freezing only 15 feet from his door.
Six hours later, she was found frozen solid, her pupils were dilated, her eyeballs ice frozen and even her feet took on the shape of her boots. Wally who found her in his driveway says that she was like frozen a meat when he carried her to the vehicle before going to the hospital.

The medical gazette quotes one of her medical doctors Edgar Sather as saying “her body was so frozen that it was impossible to use a thermometer or find a vein to get a pulse.” She was given oxygen and was subjected to a heating pad with 102-degree water temperature.
Edgar’s brother, Dr. George Sather who also helped treat the young woman said. ”I can’t explain why she’s alive. She was frozen stiff, literally. It’s a miracle.”
“I thought she was dead, but then we picked up an extremely faint whimper. We knew there was a person existing then.” He added.

Doctors believed that her survival rate was very slim— her body temperature didn’t even register on the thermometer, that means it was less than 80 degrees Fahrenheit, and even if she did survive, she would probably be amputated.
Her mother Mrs. Erickson asked for a prayer chain in hope for Jean’s survival. Soon hundreds, then thousands of people were praying for her recovery. After the prayer chain was set in motion, Jean’s legs and feet started to lighten and regain their natural color instead of getting darker, contrary to what Dr. Sather has expected.
Later that day, a miracle happened. Jean’s hands and arms began to thaw. By the third day, she was able to move her legs. And after 49 days, she fully recovered and was discharged from the hospital, alive and healthy.

Jean Hilliard’s survival case was extremely rare (and has even been called miraculous). Many others have not been as lucky as her. And so during the harsh winter season, it is better to be prepared.

Here are some tips in case your car breaks down during the harsh winter season:

1st Tip: Have an emergency survival pack. Your pack should be composed of blankets, extra clothes, flashlights with batteries, food, water, candles, a first aid kit, flares, or a red bandanna. The blankets and extra clothes are for keeping you warm. The flares, flashlight, and bandana would help others find you in the dark.
2nd Tip: Stay in the Car. Jean left her car to go to look for help. But because she miscalculated the distance, she collapsed and froze. There’s a bigger chance of survival if you take shelter in your car. It is also easier for the rescue team to find a car than a person in the snow.
3rd Tip: Use the car heater. If you can start the car, it’s better to do so by running the heater 10 minutes at a time to preserve the gas and make the heat last longer.
During the harsh winter season, it’s really better to be safe than sorry.  Prepare well for travel, and be alert and ready. For more tips on winter survival, visit


Miracles do happen in different ways. With the help of science, we can conquer the unimaginable, all we have to do is have faith and pray.
H/T: Snopes, SFglobe
Posted by Unknown at 6:38 PM