Home » »Unlabelled » 10 Foods To Avoid If You Have Arthritis

10 Foods To Avoid If You Have Arthritis 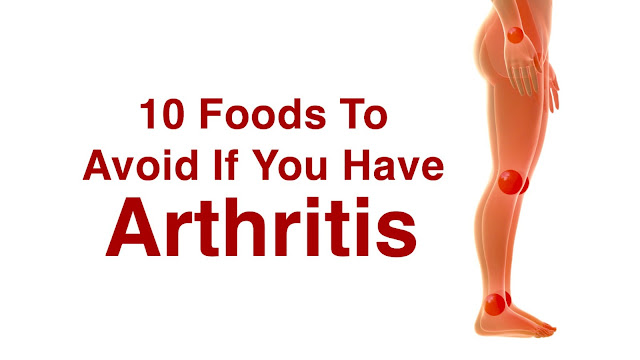 “When you have arthritis, your body is in an inflammatory state. What you eat may not only increase inflammation, it can also set you up for other chronic conditions such as obesity, heart disease and diabetes.” – The Arthritis Foundation
“…I am a 43-year old wife and mother of two grade-schoolers and have had severe rheumatoid arthritis for nearly 10 years…Things that most people take for granted, for example sleeping, bathing, brushing one’s teeth, getting dressed, making meals, and even driving a car, are extremely challenging for me.”
Indeed, individuals fortunate enough to avoid arthritis take some things for granted. As this brave mother just explained, her symptoms make every day activities difficult.
Contrary to popular belief, arthritis involves a wide array of symptoms: loss of motion, joint pain, stiffness, and swelling are the most common.
Here are some quick facts about this complex disease:
-There are more than 100 forms of arthritis and closely related diseases.
One in every four arthritis patients “say it causes severe pain (seven or higher on a zero to 10-point scale.”
– The most common types of arthritis are osteoarthritis, rheumatoid arthritis (RA), psoriatic arthritis (PsA), fibromyalgia and gout.

Certain foods stimulate an inflammatory response, and certain foods suppress an inflammatory response. The context of this article focuses on the foods to avoid with arthritis – and some suggested alternatives.
For individuals not diagnosed with arthritis, “research suggests that including anti-inflammatory foods in your diet and limiting foods that trigger joint pain” may help ward off the disease.” More scientifically-valid research cites obesity as a primary risk factor. Relatedly, consumption of inflammatory foods correlates with obesity rates.
In this article, we’ll discuss 10 foods to avoid with arthritis. We’ll also provide some suggestions on what foods to eat instead.
Let’s get going!

Gluten and wheat both produce an inflammatory response, particularly in folks who are intolerant to either. A leaky gut – or increased gut permeability – has been linked to joint pain in many studies.
A leaky gut allows toxins and waste to enter the bloodstream via the intestines; these harmful byproducts are seen as a threat, and the body initiates an immune response. The immune response is what leads to inflammation; sometimes targeting areas in and around the joints.

Many dairy products contain a type of protein called casein. Per a study conducted by the Physicians Committee for Responsible Medicine, casein protein may irritate tissue around the joints. Of course, joint irritation always results in inflammation within the surrounding area.

Corn oil or, to be more precise, any food with high doses of omega-6 fatty acids (baked goods or baked snacks among them) can produce inflammation. It is quite easy to overindulge on this fatty acid because so many foods contain it.
Corn oil isn’t the only industrial oil to refrain from consuming. All oils derived from seeds – cottonseed, canola, grapeseed, soybean, safflower, rice brain, and sunflower oil, should also be avoided.

Per a study conducted at the Icahn School of Medicine at Mount Sinai, reducing consumption of fried and processed foods “can reduce inflammation and actually help restore the body’s natural defenses regardless of age of health status.”
The same study also provides dietary recommendations to prevent other diseases.

Many foods produced today include excessive amounts of salt and preservatives; the former makes some foods more palatable, and the latter artificially extends a product’s shelf life. Regardless, consuming too much salt and preservatives may produce inflammation within the joints.
Prepared foods, including of the frozen and microwavable varieties, are often loaded with salt, preservatives, and additives.

There’s no relation to the number of years you’ve lived, despite the name. AGE is an acronym for an advanced glycation end product – a toxic byproduct resulting from fried, grilled, heated, or pasteurized foods.
Certain proteins in the body are “attacked” upon consuming AGE foods. Predictably, this stimulates an autoimmune response. Cytokines are inflammatory messengers released by the autoimmune system to protect against further damage caused by AGEs and other harmful agents. Cytokines directed to areas within or around joints exacerbates arthritis symptoms by increasing inflammation.

Surprising to see that some veggies are not recommended, huh?
The plant name for these vegetables is Solanaceae, and they contain solanine – a type of compound that produces adverse physiological reactions in arthritis patients. Consuming vegetables like eggplant, peppers, potatoes, and tomatoes can worsen arthritis pain.
If you’re a fan of sweet potatoes, here’s some great news: they’re not within this class of vegetables, and are okay to eat.

Nobody likes having to give up the occasional sugary treat, but processed sugars (similar to AGEs) release cytokines – molecules that stimulate inflammation.
Sugar, as many of you already know, is an “umbrella term” for other types of derivative ingredients; namely, ingredients that end in “ose,” such as fructose, glucose, and sucrose, among others. Just make sure you’re reading the label!

Refined carbohydrates; mainly white flour products, white potatoes, white rice, and most cereals are high-glycemic index (HGI) foods. HGI foods incite the production of byproducts (including AGEs), which worsens inflammation.
Additionally, per an article published by Scientific American, refined carbs “may increase the risk of obesity, diabetes, and heart disease more than fat does.” As mentioned, obesity is among the primary risk factors of arthritis.

Alcohol and tobacco use has been linked to development of certain arthritis types. Per healthline.com, “Studies have shown that environmental factors play a part in who develops (rheumatoid arthritis) and that smoking is a big risk factor.”
A link has been discovered between levels of alcohol use and chances of developing gout.
What to eat instead…
Here are some of the best food types for arthritis, including examples of each type, as reported by the Arthritis Foundation:
– Omega-3-rich fish; herring, mackerel, salmon and tuna.
– Soybeans; tofu and edamame
– Omega-3 foods and oil; extra virgin oil, avocado, walnuts, walnut oil (fish sources mentioned above.)
– Cherries
– Broccoli
– Green tea
– Citrus fruits; grapefruits, limes, and oranges
– Whole grains; brown rice, oatmeal
– Beans; kidney beans, pinto beans, and red beans
source   www.powerofpositivity.com
Posted by Unknown at 4:04 AM