One person is killed as mob of 20,000 Muslims burns down Hindu village in Bangladesh after rumour spread that a local had insulted Prophet Mohammed on Facebook
A mob of angry Muslims burned down a Hindu village in Bangladesh after a rumor spread a local had insulted Prophet Mohammed on Facebook.
One person was killed and at least five more seriously injured after 20,000 Muslims attacked Hindu homes in the village of Thakurbari, in the Rangpur Sadar region of the country, on Friday.
Police fired rubber bullets and tear gas at the crowd after trouble flared when a villager allegedly posted a defamatory status about Prophet Mohammed. 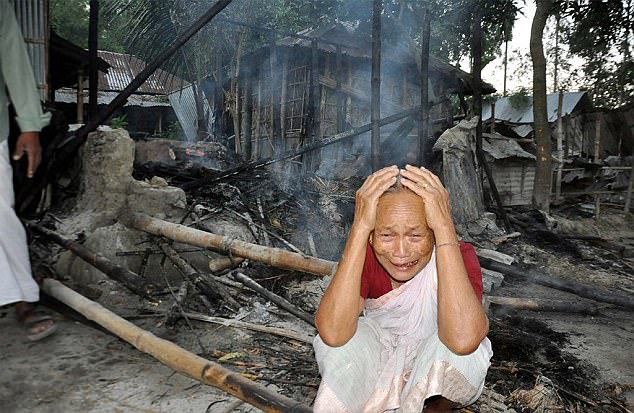 By the time police arrived at the village at least 30 homes had already been burned down while others had been looted and vandalised, according to the Dhaka Tribune.
The crowd was made up of residents from between six and seven neighbouring villages, including Paglapeer, Mominpur and Horialkuthi.
They clashed with police who fired rubber bullets to control the crowds.


Six people went to Rangpur Medical College Hospital with bullet injuries and one of them, a youth named as Hamidul Islam, later died of his injuries, according to local media.
The mob later protested against the police response to the attack, blocking the Rangpur-Dinajpur highway for around four hours.
Local magistrates are investigating the incident and families affected by the riot were being assisted by authorities, it was
reported. +2
One person was killed and at least five more ser

source  www.dailymail.co.uk
Posted by Unknown at 6:14 AM