Home » »Unlabelled » Researchers Explain How Your Gut Bacteria Causes Anxiety, According to Science

Researchers Explain How Your Gut Bacteria Causes Anxiety, According to Science 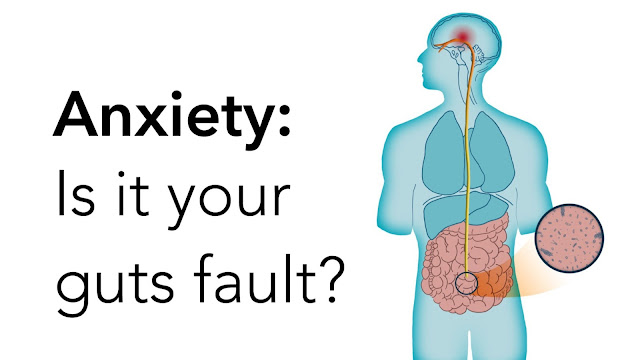 “Previous research has demonstrated that some manipulation of the balance of bacteria in the gut can impact anxiety-like behaviors, but this study is the first that links that balance to (the brain.)” ~ Abigail Miller
Anxiety is a big problem
Researchers estimate that over 40 million adults in the United States suffer from an anxiety disorder. This number is equivalent to 18 out of every 100 Americans. In just over 20 years, anxiety disorders have increased by over 67 percent.
Per the Anxiety and Depression Association of America (ADAA), anxiety disorders “are the most common mental illness in the United States.” Sadly, only about 37 percent of those with an anxiety disorder receive proper treatment.
What is an “anxiety disorder”?
“Anxiety disorder” is an umbrella term comprised of one of the following conditions: Generalized Anxiety Disorder (GAD), Panic Disorder (PD) Social Anxiety Disorder (SAD), Specific Phobias, Obsessive-Compulsive Disorder (OCD), and Posttraumatic Stress Disorder (PTSD).
Aside from to the harm inflicted on the person’s life, anxiety (which often accompanies depression) costs the U.S. economy (e.g., health care costs and insurance hikes) over $40 billion a year.

WHAT DOES THE GUT HAVE TO DO WITH ANXIETY?

It’s a common misconception that all mental health disorders stem from chemical imbalances within the brain. Certainly, neurochemical activity in the brain plays a significant role in many – but not all – cases of mental illness.
An article published by Harvard Medical School (HMS), titled “The gut-brain connection,” explains this delicate relationship. Here are highlights of the HMS article:
– The gut can send signals to the brain, and the brain to the gut.
– Stomach or intestinal distress can interfere with gut-brain and brain-gut neuronal transmission (“signaling”).
– If signal interference is severe, stomach or intestinal stress can “be the cause or the product” of anxiety, depression, or stress.
Our “Second brain”
If you thought our brain and body was complex before, wait until you read this!
Did you know that over 90 percent of serotonin – the neurochemical responsible for a stable mood – is produced in the gut?
The gut is also lined with a network of neurons –specialized cells responsible for transmitting nerve impulses. This complex network allows the gut to interact with the central nervous system (CNS) – namely, the brain – and vice-versa.
Most interactions take place between along the gut-brain axis. Interestingly, scientists have taken it upon themselves to call this communication center the “gut-brain” axis.
The gut-brain axis and mental health
Our gastrointestinal (GI) tract is home to billions of healthy bacteria called gut flora. This bacterial community is responsible for normalizing many functions within the gut including digestion, vitamin and mineral synthesis and absorption, and the inflammatory response.
The gut-brain axis is the focal point of many studies about both mental and physical health.
What scientists have discovered
Scientists are, by now, aware of the gut-brain connection. However, only recently have researchers found that gut bacteria significantly impacts mental health.
Researchers at the University of Cork (Ireland), for example, made a groundbreaking discovery. “Gene regulators” – genes that “encode (proteins)” play a fundamental role in anxiety illnesses and are impacted by bacterial levels in the gut.
What does this mean for my health?
To avoid turning this article into something you’d read in some neuroscience textbook, here is the study’s “CliffsNotes”:
– The study is one in a growing body of research that links gut bacteria and mental health.
– One gene regulator, called the microRNA (miRNA), caused a high level of anxiety in mice lacking the proper gut bacteria.
– Injecting miRNA into mice eased previous anxiety symptoms.
– Findings suggest that a healthy balance of gut bacteria is necessary for appropriate regulation of miRNA.
– In turn, miRNA may have a direct effect on anxiety levels in humans.
– The study could lead to the manufacture of treatments that more specifically target the gut rather than the brain.
Treatment implications
The University of Cork study is the first of its kind to associate microbial balance within the gut to specific areas of the brain.
Dr. Gerald Clark, the lead author of the study, explains:
“This (study) is important because these miRNAs may affect (processes) fundamental to the central nervous system and in brain regions, such as the amygdala and prefrontal cortex (PFC).”
The amygdala (um-ig-duh-luh) is a primitive, tiny walnut-shaped area of the brain thought to be responsible for emotions. The PFC is our brain’s “executive region,” and is responsible for several important functions (planning, decision-making, social behavior, etc.)
Should scientists successfully replicate these findings, it could make a world of difference for people suffering from anxiety. If there’s even a chance of better treating such a widespread and life-changing mental disorder, God Speed.