Home » »Unlabelled » 6 Foods That Cause Inflammation In Your Body

6 Foods That Cause Inflammation In Your Body 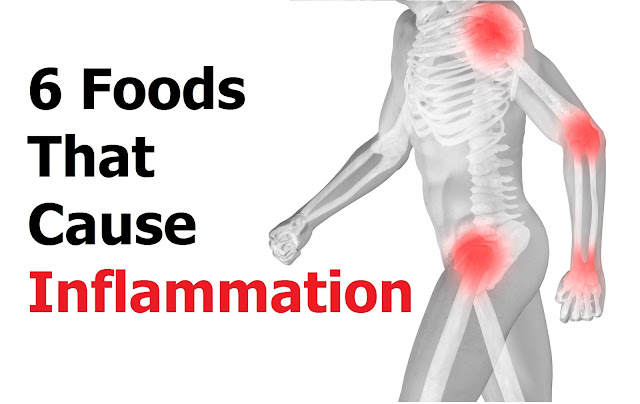 From literatures, it is apparent that there is a general concept that chronic inflammation can be a major cause of cancers and express aging processes…studies suggest that chronic inflammation could have serious roles in a wide variety of age-related diseases including diabetes, cardiovascular and autoimmune diseases. – Khansari N., Shakiba Y., & Mahmoudi M.: “Chronic inflammation and oxidative stress as a major cause of age-related diseases and cancer”
The word ‘inflammation’ doesn’t really evoke much concern, does it? Actually, many people associate inflammation with swelling – which, is true to some extent – however, inflammation can actually be a very dangerous thing.
Strange as it sounds, inflammation is actually a necessary defense mechanism of the body: “Inflammation is the body’s attempt at self-protection; the aim being to remove harmful stimuli, including damaged cells, irritants, or pathogens – and begin the healing process.” However, inflammation of the chronic variety can be very harmful.
As can be gathered by reading a snippet of the inflammation study preceding this article, inflammation can actually cause a wide range of diseases, some of them fatal. Chronic (long-term) inflammation has been associated with conditions such as Alzheimer’s, cancer, heart disease and stroke.
Not so surprisingly, our diets affect the inflammatory response in the body. In America – along with other developed nations – this is bad news; as our shelves are stocked with heavily-processed foods and ingredients.

HERE ARE 6 FOODS THAT CAUSE INFLAMMATION IN THE BODY:

Pretty much everything that it fried has a thick layer of fat, also known as batter, around it. As unhealthy as this unnecessary fat is, it is actually the temperatures that fried food is prepared in that primarily causes inflammation.
Fried foods are prepared at temperatures between 350-375 degrees Fahrenheit (177-191 degrees Celsius). At this range, the food forms glycation end-products that are very unhealthy. Actually, the body perceives these byproducts as threats and initiates an inflammation response.
So, when the urge to chow down on fried chicken or French fries arises…try to think twice!

In the past, processed foods were notorious for containing excessive levels of trans fats. Due to damning medical research and consumer backlash, companies slowly but surely began eliminating them. Still, it is still wise to check the ingredients label for hydrogenated or partially hydrogenated vegetable oil – and leave them alone.
The reason is that trans fats damage the cells that line our blood vessels; of course, this stimulates inflammation. In a study published by the National Institutes of Health, “TFA (Trans Fatty Acid) intake is positively associated with markers of systemic inflammation…(the) influences of TFAs on inflammation and of implications for coronary disease, diabetes, and other conditions is warranted.”
Furthermore, the Food and Drug Administration (FDA) no longer recognizes hydrogenated or partially hydrogenated vegetable oil as safe, and should be eliminated in the production of food.

White breads and pastas are quickly broken down into sugars and are absorbed by the body. These products also cause inflammation. Says once scientist about white breads: “They’ve been refined in a way that goes against nature, goes against what our bodies need.” The refinement process that many of these foods undergo irritates our body as a result.
A study published in The Journal of Nutrition links refined grains (including white bread) with higher concentrations of inflammatory proteins in the blood. Meanwhile, the same study attributes whole-grain consumption with lower levels of these proteins.
The lesson? Whole grain breads are much healthier, and white bread is even more unhealthy that we originally thought.

Granted alcohol is not a food, but the dangers it poses on human health cannot be ignored; specifically, the potentially hazardous inflammation responses induced by heavy consumption.
In theory, alcohol shouldn’t lead to any lasting damage unless it is overdone. Heavy consumption, however, can allow bacteria to penetrate through the intestinal wall. Of course, the presence of bacteria initiates an autoimmune response that involves irritation and inflammation.

Chinese food lovers: you may want to read this. Monosodium glutamate (MSG) is thought to be an inflammation starter, although the exact mechanisms behind the response aren’t well-known, consumption of MSG is thought to cause inflammation of the blood vessels. Anecdotally, many individuals complain of rash, skin irritation and inflammation after consuming the substance.
Related article: 6 Things People With A Healthy Gut Do Differently
Simply put, MSG is not an element that the human body is adapted to. When this is the case, it becomes very difficult to hypothesize the potential effects from consuming it. What is known about MSG is that the chemical can exacerbate weight gain, cause headaches, raise blood pressure, and is potentially damaging to the liver.

There is perhaps no food additive that’s come under such intense scrutiny in recent years. Gluten – a substance in cereal grains and wheat – is known for causing bloating and/or digestive problems. These and other findings are persuading more and more individuals to stop consuming the substance.
The side effects experienced from gluten – including the bloating and digestive problems mentioned prior – are thought to surface from an inflammatory response to the chemical.
source  www.powerofpositivity.com
Posted by Unknown at 5:15 AM