BREAKING: FBI Admits The San Bernardino Shooters Were NOT MUSLIMS! 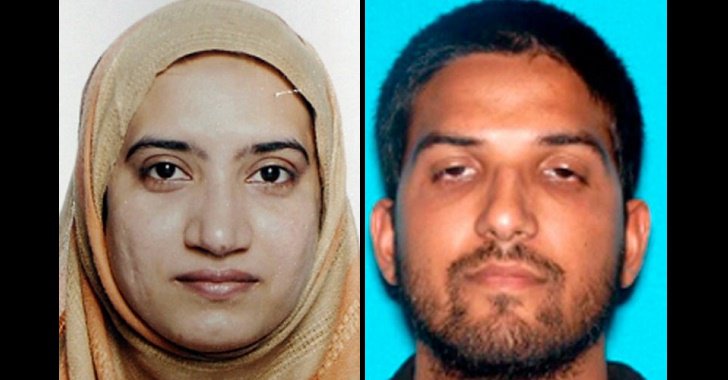 On Wednesday, the Director of the Federal Bureau of Investigations said the agency has no evidence the married couple accused of killing 14 people in San Bernardino, California earlier this month had any connection to an active terror cell. This admission from the FBI directly contradicts media reports that immediately claimed the San Bernardino shooters were linked to Daesh (ISIS) via social media.
Speaking at a counterterrorism conference in New York, Director James Comey said Syed Farook and Tashfeen Malik were inspired by Daesh, but were not directly involved with any specific terror group. Reuters reports that Comey believes Daesh has “revolutionized” terrorism by using social media to spread propaganda to inspire small-scale attacks.
“Your parents’ al Qaeda was a very different model than the threat we face today,” Comey said.
Despite the admission the couple had no connection to Daesh, Comey said Farook and Malik had shown support for “jihad and martyrdom” in private communications as early as 2013, but never in public on social media. The director also stated the FBI has “hundreds” of ongoing investigations in every state in the nation that involve potential Daesh-inspired terror plots.
Comey also repeated his calls for ending encrypted communication based on the premise that Daesh uses encryption to plan terror attacks. “We are not going to break the Internet,” he said while challenging technology companies to stop creating services that cannot be accessed by law enforcement. Comey’s calls for breaking encrypted communications echo the recent efforts of police chiefs and attorney generals across the United States.
Another piece of the puzzle that must be considered pertains to conflicting eyewitness accounts of the San Bernardino shooting. Although the oldstream media quickly accepted the narrative of a Muslim couple radicalized by anti-American sentiment and radical Islam, there was at least one conflicting account that should be investigated.
Shortly after the shooting, witness Sally Abdelmageed talked to CBS News about what she saw.  Abdelmageed works at the Inland Regional Center and saw the shooters enter the building. She told CBS’s Scott Pelley that she saw what appeared to be three white men dressed in military clothes.
“We saw three men dressed in all black military attire, with vests on, holding assault rifles, and they opened up the doors to building 3 and one of them starts to spray and shoot all over the room,” Sally Abdelmageed told Pelley.
When asked to provide more detail about the shooters she said, “I couldn’t see a face, he had a black hat on, from my view all i could see was a black hat. A black long sleeve shirt, possibly gloves on, he had black cargo pants, the kinds with zippers and big puffy pockets. He had a huge assault rifle and extra ammo. I just saw three.”
“You’re certain you saw three men?” Pelley asked.
“Yes, it looked like their skin color was white. They looked like they were athletic and they appeared to be tall.”
Her account matches the original report from Southern California’s Fox 11, which tweetedthat police were searching for “3 white males dressed in military gear.” Another eyewitness expressed doubt that Farook was the culprit.
Whatever the truth is, it seems obvious the government will use this crisis to add more fuel to the fire that is the global War on Terror. This fire — and the insanity it breeds — threatens to consume the planet, leaving behind a scorched Earth devoid of common sense and critical thinking. Avoiding catastrophe and further division of the people is going to take each and every awakened soul.
source  www.conspiracyclub.c
Posted by Unknown at 11:51 PM