Home » »Unlabelled » Stunning rose cake looks too good to eat, until you see the inside

Stunning rose cake looks too good to eat, until you see the inside 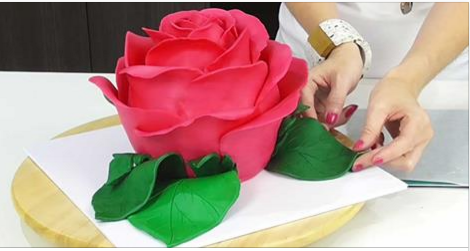 jon and Vanessa are not just partners in life, they're also partners in baking. The husband and wife started Cake Style, a popular, cake-centric YouTube channel back in November of 2012. The initial videos were more modest in style: how to cut layers in cakes, how to fill a cake with buttercream, etc. But as the page grew, the recipes became more involved and the designs more extravagant.

The channel has a whopping 300,000 subscribers and more than 1 million page views. The Australia-based couple makes holiday-themed treats, pop culture cakes, and cookies of all kinds. Jon and Vanessa have two daughters, and it's clear that the whole family has a major sweet tooth.
In December of last year, Cake Style shared a tutorial/recipe that has instantly become a fan favorite. The "Beautiful Rose Cake" tutorial video has been viewed nearly 2 million times, making it the most-viewed video on the channel.

It all starts with two round vanilla cakes. From there, there are a number of steps taken before the rose cake comes to completion. It's certainly a meticulous process, and one for people who really love baking, but the end result is just stunning. It almost looks too good to eat.
If you have an affinity for baking - and some free time on your hands - check out the recipe below and follow along. If you're just a casual fan, you still ought to give the video a spin to see the incredible process in action.


source   sfglobe.com
Posted by Unknown at 7:26 AM