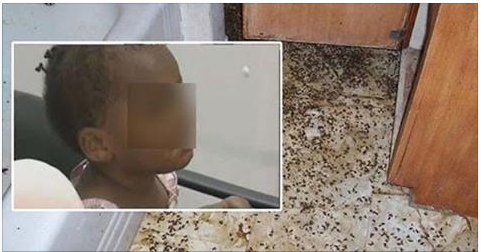 According to police, it looks like Sandra slipped in the tub and hit her head, causing hemorrhaging in the brain.
So are humans wired to survive? It sure seems like it. There are many examples of hard-wired human instincts that help keep us alive. This one-year-old girl survived by eating cockroaches and drinking toilet water for two weeks.
If you feed a baby some sweet banana mash, she’ll probably eat it up. If you give her some mushy rhubarb, she’ll most likely spit it out. While rhubarb isn’t dangerous, it’s bitter, and our natural hard-wired instinct tells us to spit it out because it could be toxic. But 1-year-old Stacy Jones knew she had to survive—no matter how awful her food tasted like.
Stacy’s mom, Sandra, went into the bathroom to take a shower—but she never came back out. Time came when Stacy felt hungry and ate whatever was there in their house. Unfortunately, cockroaches were the only things she could eat. 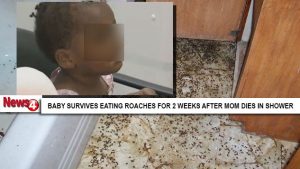 The police believe she also survived on toilet water, since the bathroom door was the only door open where she could come in and out. For two weeks, Stacy fed on cockroaches, while her mother’s body was slowly decomposing in the bathtub.
The police superintendent was asked to open up the apartment of Sandra Jones when her family was unable to contact her. When he walked in, he was greeted by the smell of a decaying body and feces and urine which covered the one-year-old little girl. “It’s a miracle she’s alive,” said Ronald Megan, superintendent. “I mean she ate the roaches because she was starving. That little girl knew what to do to survive. The house was absolutely disgusting, but thank God. If these roaches weren’t here that little girl would be dead.”
The child was rushed to the emergency room for evaluation and was released the next morning. She is currently in the custody of her aunt while they investigate the incident. According to police, it looks like Sandra slipped in the tub and hit her head, causing hemorrhaging in the brain. They believe it was an immediate death.
Source : viral4real.com
Posted by Unknown at 6:14 AM