Home » »Unlabelled » The 24-year-old held her dead baby in her arms. This is what she had to say to his killer on Facebook.

The 24-year-old held her dead baby in her arms. This is what she had to say to his killer on Facebook. 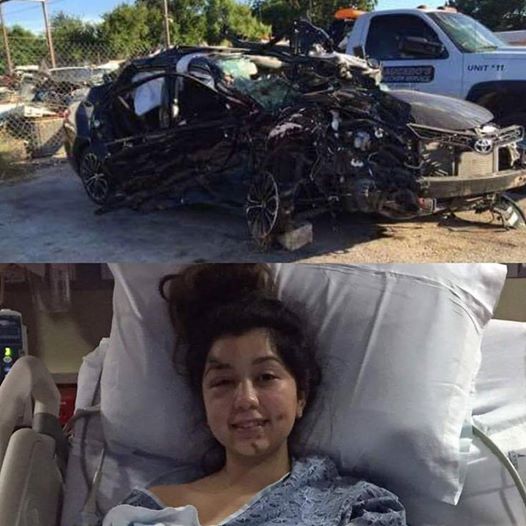 Kristian Guerrero and her husband Fabian of Texas, both 24, were joyously awaiting the arrival of their first child. They had just had an ultrasound which revealed they were expecting a boy, who would be born in the new year. On August 2, the two were driving home after lunch in San Antonio. These were to be the last moments of Fabian's life.
A drunk driver, 21 years old, collided with their car head on. Fabian died instantly. Also seriously injured, Kristian was rushed to the hospital, where the ultrasound showed her baby still had a heartbeat, although it was very faint. But a few hours later, he sadly died. Doctors had to induce birth to deliver the baby.
"When I first held him, I felt an overwhelming peace," the young widow recalled in a voice choked up with emotion. "But when I held him and saw his tiny face, I felt as if Fabian, his father, was with me. I cried out to him to take care of our son. It was a very emotional moment for everyone in the room. He had all of his father's features so I felt as if I got my final chance to see my husband again. He was the most precious thing I ever laid eyes on."
One can hardly imagine what kind of pain and loss the young woman experienced in these moments. But Kristian didn't want her small family to have died in vain. So she wrote this urgent message under a photo that had been taken of her in the hospital:
"This is me finally being able to hold my son. This is what being in an induced labor for almost 24 hrs after surviving a car crash that killed my husband and my son looks like. All because someone thought it was okay to get wasted and drive. It's not okay. It IS okay to stop a friend from driving, it IS okay to take someone's keys away from them when they're showing signs of being drunk. And it IS okay to pick up the phone and call for a ride if you find yourself feeling a little too tipsy. It's not a sign of weakness. It's a sign of maturity to be honest with yourself and know the consequences of driving drunk outweigh any kind of shame you might feel admitting you're too drunk to drive. What's not okay is spending the rest of your life with the guilt of knowing you've taken someone's life and taken someone's life away before they even got a chance to be in this world. It's not worth it. Don't drink and drive. Don't risk your freedom. You're putting not only your life in danger but also everyone else on the road. I could've died aug 2nd but God had other plans. I'm left behind to fight this fight for my husband and my son. And I will continue to spread awareness and share this story until the day I die in hopes it prevents anyone else from feeling the pain I walk around with every day. I refuse to let my husband and my sons deaths be in vain."
The 21-year-old driver of the other car survived the accident with serious injuries and is being charged with intoxication assault and two counts of intoxication manslaughter.


Both the perpetrator and Kristian will have to live with this terrible tragedy for the rest of their young lives. But perhaps Kristian's powerful words will change someone else's destiny and save them from making an irreversible and deadly decision.
source  www.hefty.co
Posted by Unknown at 8:03 PM