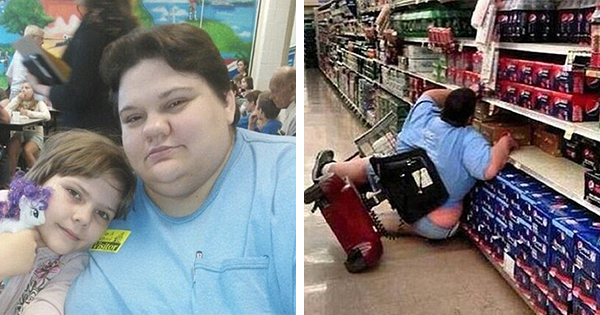 Jennifer Knapp Wilkinson. You may not know her name but you certainly know what she looks like.
A while ago, a photo of her in her mobility scooter (which had tipped over) went viral for a very nasty reason.
But now Jennifer has revealed the truth behind the image the world ended up laughing at.
The image first appeared on an online page, which poked fun at Walmart customers. The Facebook page is called People of Walmart.
The photo was taken a staggering four years ago. But now, Jennifer is speaking out about that day.

She’s also revealing the shocking impact the humiliating experience had on her. ‘It is never just harmless fun to laugh at someone.’
Jennifer is 39-years-old and a mother of two. She is still suffering from obesity, and is struggling to lose weight, this is due to a spinal condition.
She also suffers from ADHA and PTSD (Post Traumatic Stress Disorder).
According to Jennifer, she only found out the photo had been taken when her sister found it online and asked if it was her.
source blog.auntyacid.com
Posted by Unknown at 6:40 AM