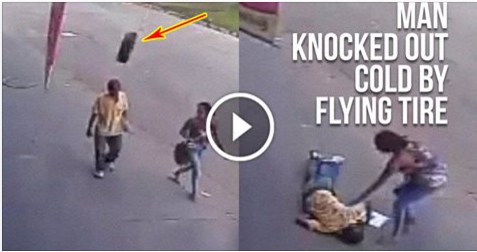 50-year-old Roberto Carlos Fernandes was probably the most unlucky man that day when he was suddenly knocked out cold by a flying tire.


The Brazilian man was walking in the street with his daughter…

When out of nowhere, a tire came flying – hitting Roberto at the back of the head, instantly knocking him out.

Good thing passersby came to help. One bystander even ran to get the tire.

A rescue response team arrived in 10 minutes and brought the man in Hospital Marcio Cunha, Ipatinga for treatment.

The shocking accident was such a scare for Caroline, Roberto’s daughter.
She said: “We were coming home when I heard a horn and looked, but I did not see anything. Suddenly, the horn became louder and, when I noticed it, the wheel was already on top of my father.”

This is probably one of the freakiest accident you’ll ever see.


According to reports, the tire was from a vehicle taking the nearby BR381 route.
Meanwhile, Mr. Fernandes is now in stable condition. Despite being hit, knocked out and fell face first on the pavement, he was still considered a lucky man to be alive. He’s just in the wrong place at the wrong time.
Via: Elite Readers, LiveLeak
Posted by Unknown at 9:30 AM