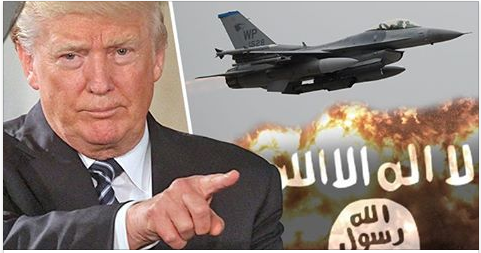 US-COALITION forces have hammered the barbaric Islamic State (ISIS) with 27 air strikes on the same day a depraved suicide bomber killed 22 people and injured more than 60 others at Manchester Arena.


American-led military fighters hit 37 targets of the sick jihadis with 18 strikes in war-torn Syria and 62 ISIS targets in Iraq.
Oil supplies, vehicles and weapon caches were obliterated along with a cache of deadly weapons including rocket systems, machine guns,vehicle bombs and grenade launches.
US officials said the hammering took place as part of Operation Inherent Resolve, aimed at crushing the sick terror cult in Syria and Iraq. GETTY
US-coaliton forces have smashed ISIS targets
It came on the same day ISIS suicide bomber Salman Abedi killed 22 people and injured dozens others at a Ariana Grande concert on Monday night.
It has since emerged Abedi, 22, is believed to have travelled to Syria, as recently as this week. He has also travelled to Libya, where his parents are from.
Donald Trump yesterday expressed his "deepest condolences" to those killed in the Manchester Arena terror attack.
The US President, who is currently in Bethlehem, branded the attacker an “evil loser” for striking at an Ariana Grande concert filled with children and young people enjoying life. GETTY
Putin has vowed to crush ISIS
He said: “I won’t call them monsters because they would like that term. They would think that’s a great name.
“I will call them from now on losers because that is what they are, they are losers.” NC
Salman Abedi
young as eight killed by a bomb packed with nails, nuts and bolts.
He warned ISIS terrorists who masterminded the attack that it will not go "unpunished”. GETTY
Tributes to the Manchester Arena victims have been flooding in
Four people, including a 23-year-old, have been arrested in Manchester in connection with the attack.
source  www.express.co.uk
Posted by Unknown at 6:08 AM